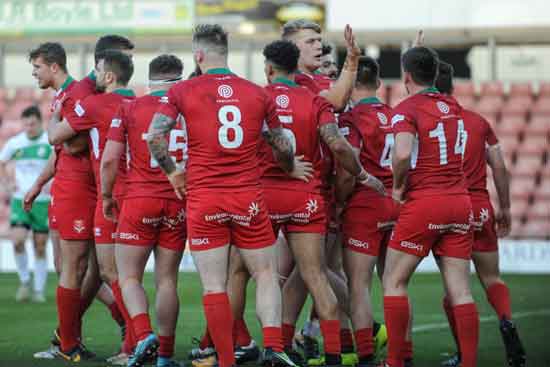 Wales men’s team head coach John Kear has named a 23-man squad for this autumn’s 9s World Cup, which will take place at Parramatta Eels’ Bankwest Stadium in Sydney on October 18 and 19.

The 23 players have been selected to take part in a short training camp in North Wales in late September and Kear will whittle the final squad down to 16 players ahead of the tournament.

All but three players have been picked from the elite train-on squad announced for 2019 and 2020, with Burleigh Bears’ Will Evans, Huddersfield Giants’ Josh Pinder and Daniel Brown of St Mary’s drafted in.

Elliot Kear, who will skipper Wales for the second tournament running at this autumn’s 9s World Cup, is included in the 23, as is London Broncos teammate and leading try-scorer of all-time Rhys Williams.

St Helens’ Regan Grace has been named in the squad, while the likes of Rhys Evans, Lloyd White, Gil Dudson and Ben Flower could feature for the first time in a couple of years.

Wales head coach John Kear said: “We’ve got plenty of quality in our squad for the 9s World Cup and we’re looking forward to giving it a good go.

“This format is going to be new to a lot of the players, but it’s an opportunity for them to go out to Australia, enjoy themselves and build on last year’s internationals.

“We’ve got a lot of young players coming through and it’s a chance for them to test themselves against some of the best players in the world.

“It’ll be good to have a couple of players returning to the frame this year and they’re all keen to be on board as we build towards the next European Championship and World Cup.

“It’s important we play more fixtures as a group as it’ll only help us to develop.”