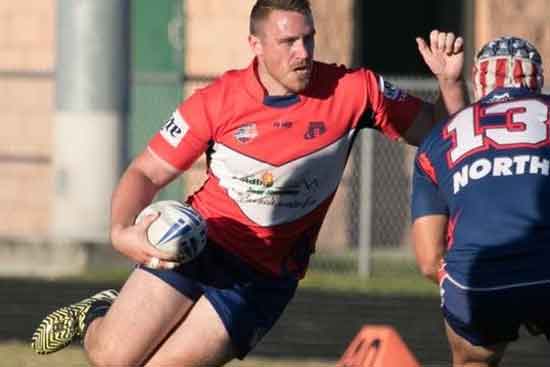 The South Conference has extended its win streak in the annual USA Rugby League (USARL) All-Star game with an entertaining 44-32 victory over the North Saturday night in Tampa, Florida.

Down 10-0 early on and trailing 22-10 at halftime, the South lifted in the second half to storm home for the W.

South head coach Sean Rutgerson says from the opening kickoff his team looked to be in dire straits as they made some errors and gave the North the ascendancy.

“They capitalised on that and it looked like they were in control, but our boys stuck to their guns and things turned around later on,” he says.

“We still made plenty of errors, but they started making a few errors too and we just took advantage of that. I’m really happy with the effort of our guys and couldn’t be more proud of how they played. The North made a few errors on the backend and it cost them.”

Rutgerson says there was some hard running up the middle by big guys on both teams.

He adds that South backs including Josh Jackson, James Williams, David Washington and Rodrigues Ceasar all put in solid games and made a difference. As far as potential USA Hawks players are concerned, the coach says several on both sides did their selection chances no harm.

“Centre Jon St John (Tampa Mayhem) came on and made an impact straight away and Malcolm Webb (Jacksonville Axemen) also played well for the South,” he says. “And for the North Brock Davies (Brooklyn Kings) played pretty well, as did Matt Walsh and David Griener (White Plains Wombats).”

From the North’s standpoint, first time head coach CJ Cortalano says while the end result was obviously disappointing, he feels he was able to offer something to his players.

“I put a little bit on their plate and was demanding of them,” he says. “My mentality on it is you were selected for a reason so we’re going to play as if you are a caliber of player to be here.

“Some people played up to it and others did not and that came out in the wash during the game.”

Cortalano goes on to say that it was a tale of two halves for the North.

“We did a lot of good things in the beginning and then some of the guys regressed back into a way of playing that didn’t mesh up with what we were trying to do,” he continues.

“If we would have stuck to our game plan it would’ve been a lot better. In the first half it was working really well, it was efficient, and we had them on the ropes and in the second half we didn’t complete our sets early on and made a lot of stupid mistakes.”

James Williams (Jacksonville Axemen) was named MVP for the South, while Kevin Reed (Brooklyn Kings) was MVP for the North.

Despite the damaging effects along the US east coast from Hurricane #Dorian, the game went off without a hitch. Organiser and USA team manager Billy Neilson says it was a successful event.

“Overall the game went great,” he told RugbyLeaguePlanet. “The field was in perfect condition and there was a good crowd.”

The next task for coaches Rutgerson and Cortalano is to pick the national squad for next month’s Rugby League Nines World Cup in Sydney. The final 16-man squad for that is expected to be named within the next week to ten days.