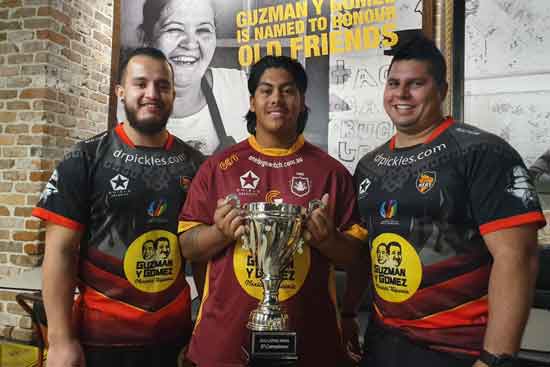 DESPITE the absence of eligible NRL talents Marcelo Montoya and Daniel Vasquez, Chile will still start favourite at the 2019 GYG Latino Rugby League 9s next Saturday.

Continuing to prove that Latinos are not solely restricted to football of the roundball variety, six South and Central American nations will go head-to-head on Saturday, September 7 at Hillier Oval, Liverpool, west of Sydney.

Chile has won the previous two incarnations of the event and last year became the first Latin American nation to feature in a Rugby League World Cup qualifier.

While Montoya (Canterbury Bulldogs) and Vasquez (Cronulla Sharks) are unavailable, the Chileans have more than 40 players with rugby league experience in Tier One nations to select from, and are expected to include Touch World Cup player Erick Lucero in their final 15- man squad.

Narrow runners-up the last two tournaments, Peru, have also strengthened their line up noticeably, adding a handful of young livewires to their veteran core under ambitious coach Jaime Perez.

Indeed, across the board, the depth in all nations has improved, with roughly three times the number of players registering their interest to play in 2019 as compared to the inaugural event in 2015.

Two new nations – Brasil and Nicaragua – have been added to this year’s format, marking their first venture in international nine-a-side.

Brasil is current reigning Latin American champion in 13-a-side after beating Argentina in a thriller in Sao Paulo in 2018, a tournament Chile was absent from due to World Cup qualifiers.

However, the world’s fifth-largest country will have to adapt to a new format with a new-look team, and will be without injured ex-Super League spearhead Matt Gardner (ruptured bicep), who will coach the Brasileiros instead.

Peru and Brasil will be joined in Pool B by Uruguay, a nation which placed 3rd at the last Latino 9s and renowned for an aggressive and skilful style.

The Uruguayans are built around the artful Papa brothers, who much like the Walters brothers, combine to provide a three-pronged attacking threat.

Rookies Nicaragua will kick-off their debut tournament with a much-anticipated Pool A grudge match against El Salvador in the event opener at 10am.

Dual-eligible outside back Michael Zamora-Rivera has defected from the Salvadorans to help coordinate the Nicaragua side, a similar path followed by off-field administrator Chris Reid.

Particular interest will surround whether former Chilean captain Jonathan Espinoza opts to follow suit, given he is eligible for Nicaragua via his father.

After being a standout for Chile in the World Cup qualifiers and for Latin Heat at the Emerging Nations World Championship, speed merchant Thomas Garrido is expected to miss the tournament after breaking his leg earlier in the season.

Should Garrido suit up, again there will be amplified interest, given he can qualify to play for both favourites in each pool – Chile and Peru.

In both previous finals, Chile beat Peru by just a single try and, on both occasions, were forced to make try-saving tackles on the final play of the game.

Previous entrants Colombia and Ecuador will both sit out this year’s Latino Nines, with Colombia instead concentrating on their October 19 international against Uruguay (13-a-side) in Brisbane.

Ecuador is on hiatus while going through a team rebuild, but is aiming to be back on the field for the Cabramatta International Nines in early 2020.

Prizemoney will be offered for the first time thanks to S.H.I.E.L.D Security, with the winners taking $1200, runners-up collecting $500 and third scoring $300.

Entry is $5 and all money raised from the day will go directly to assisting domestic rugby league in Latin America.

Recent advances in domestic Latin American activity are exhibited by Brasil’s historic acceptance to the 2021 Women’s Rugby League World Cup in England, qualifying with a 100 per cent homegrown team.