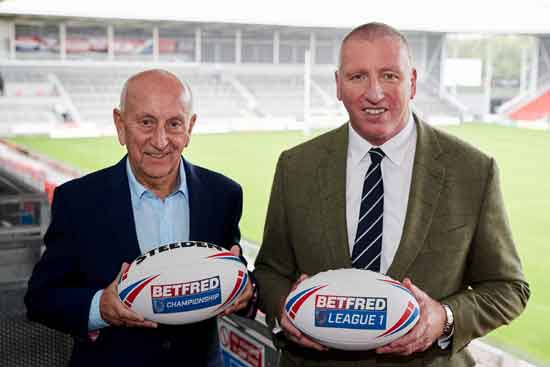 Betfred is to extend its sponsorship of Rugby League’s Championship and League 1 competitions by a further two years – and more than double its annual financial contribution to the game outside Super League.

The announcement means that the leading UK bookmaker will sponsor all three professional tiers of the sport, including the Betfred Super League, until the end of the 2021 season.

Rugby Football League Chief Executive, Ralph Rimmer, said:
“Betfred have been supporting our Championship and League 1 competitions since 2018 and I am delighted that they will continue that support for a further two years. Their energy and enthusiasm off the field mirrors the product on the field, where clubs and players are beginning to gear up for what will be a thrilling play-off series in two vibrant competitions.”

Betfred boss Fred Done added:
“We’ve enjoyed a great relationship with Rugby League and its supporters and therefore I am delighted that we are now able to further extend our sponsorship of the Championship and League 1 in line with our recent Super League and Women’s Super League agreements. Sport provides tremendous content for our digital platforms and we are delighted that through deals like these we are able to be a part of it.”

The Betfred Championship play-offs get underway on the weekend of Saturday 14/Sunday 15 September when the teams finishing in second, third, fourth and fifth places will all be in action. Canadian team the Toronto Wolfpack have already been crowned ‘League Leaders’ and are therefore entitled to a bye on the first weekend of the play-offs before entertaining the winner of second versus third on Sunday 22 September (6.30pm GMT).

All Betfred Championship play-off games will be played at the home ground of the team ranked highest in the league at the end of the regular season. Sky Sports will show play-off action on their various channels, as well as round-the-clock updates via the Sky Sports app and Sky Sports News.

Automatic promotion beckons for the winners of Betfred League 1, while the teams finishing in the five places immediately behind them will take part in a play-off series to determine who else is promoted to the Championship.

Full play-off structures are available on the RFL website.