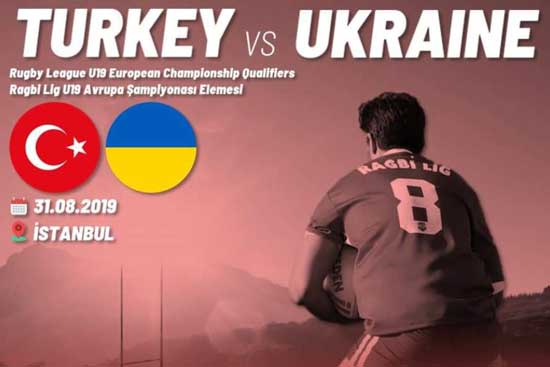 Turkey will face Ukraine this Saturday (31 August) at the Beylerbeyi Stadium, Istanbul to determine the eighth nation to play in the 2020 U19s European Championship (kick off 3pm).

The winners will head to Lignano Sabbiadoro in Italy to join the hosts, France, England, Wales, Scotland, Serbia and Ireland from 3–13 September next year.

Turkey RLA have run training camps in Eskisehir, Ankara and Istanbul in preparation.

“The U19 European Championship is a big stage for us and qualification for the main event would mean a huge step,” said their U19 head coach, Kemal Ege Gurkan.

“Whatever the result, we aim to create a team that is embraced. This is likely to be a generation that will represent Turkey at the higher stages of international rugby league in senior level and they need to start their stories by winning hearts in this campaign.”

Rugby League in Turkey has continued to grow with more than 15 men’s and women’s teams competing, encompassing around four hundred senior players and their leading side, Kadikoy Bullls, reaching the semi finals of the Balkan Super League.

“We are actively encouraging more players especially youngsters aged between 16-19, who are making their first steps in the sport,” added Gurkan.

Team Manager Oytun Colok noted: “Turkey is a country with a young population. We prepare our young players for international matches mentally, technically and physically and are creating a genuine brotherhood.”

Their Ukrainian counterparts have played two games in Serbia as part of their build up, defeating Serbia U19s ‘A’ 44-0 and the full Serbian U19s side, 32-10, both games at the SC Inge stadium in Belgrade.

Artur Martyrosian, Ukraine Federation of Rugby League president, commented: “One of the general aims of our Federation is to grow the sport to the highest level, so the participation of our senior and junior national teams at European Championships is a very important pointer. We really want to take a part in the full U19s European Championship next year.”

Lviv contribute seven players to the Ukrainian squad, which is made up of players from six domestic clubs.