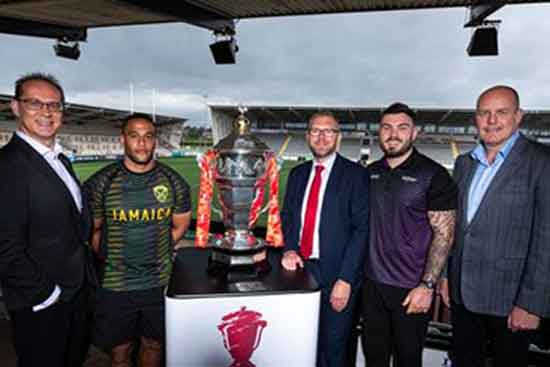 Rugby League World Cup 2021 (RLWC2021) has today confirmed Kingston Park as the final stadium to host fixtures in two years’ time. The home of Newcastle Thunder and Newcastle Falcons will replace West Cumbria’s Allerdale stadium following the council’s decision to withdraw their bid to host matches following their decision to reconsider plans for a new stadium in Workington.

The 10,200-capacity stadium has seen some iconic games since it opened its doors in 1990 and has been home to Newcastle Thunder since 2015, and fans will be relishing the chance to see the pinnacle of rugby league when the tournament comes to the UK in October and November 2021.

The Rugby League World Cup is the most high-profile event in the sport of rugby league, globally contested every four years. England 2021 will be a momentous occasion in the tournament’s history with the men’s, women’s and wheelchair rugby league being staged together for the first time.

Jon Dutton, Chief Executive of RLWC2021, commented: “We are very pleased to be able to confirm Kingston Park as a host venue for our event in 2021. Newcastle is already playing a critical part in the tournament and we are delighted to add a further three high-profile matches in the city.

“Given the disappointing news regarding the withdrawal of Allerdale, we wanted to ensure that the replacement venue was within reach of West Cumbria, whilst also offering rugby league and sports fans the opportunity to have a broader offer in Newcastle that will add to an already exciting opening weekend”.

Councillor Nick Forbes, leader at Newcastle City Council, said: “I am thrilled to announce that Newcastle will host an additional three Rugby League World Cup games in 2021 at the Kingston Park stadium.

“The city will play a huge role in this unmissable tournament with St James’ Park hosting the opening ceremony and England’s first match followed by these matches at Kingston Park.

“Newcastle is building a growing reputation as a city that can host huge events, this year we have welcomed 100,000 visitors for the Heineken Cup Challenge and Champions Cup Finals and inspirational athletes from across the globe competing in the World Transplant Games.

“I look forward to once again showcasing what Newcastle is all about, our friendly Geordie welcome, vibrant city centre and unrivalled passion for sport.”

“With Newcastle now hosting four matches in the Men’s Tournament, as well as the opening ceremony, the city will play a huge part in the 2021 Rugby League World Cup. Kingston Park Stadium has tremendous supporter and corporate facilities and we look forward to welcoming three capacity crowds and showing the rugby league community our famous Geordie welcome.”