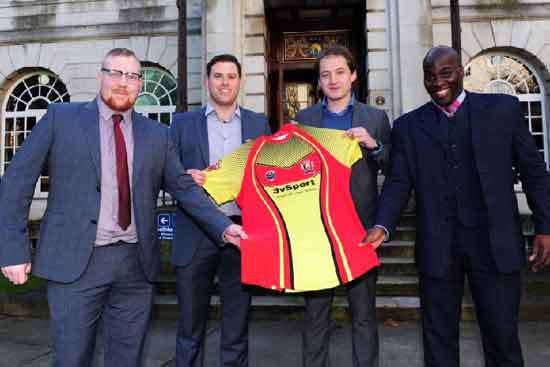 One of the stalwart administrators in European rugby league, Yves-Michael Kazadi (On the right in photo), is standing down after ten years – the last five as president – of the Belgium Rugby League Association, due to ill-health.

“It has been a pleasure to help develop the sport here but I must now focus on my family,” he said

“I am hoping to be back in some capacity. We made it to 17th in the world rankings, were helped from the beginning by our neighbours in the Netherlands, and our most recent national head coach Tony Benson who significantly helped to raise the standard and profile over the past three years.”

The Belgium Rugby League Association began under Kazadi in 2009 and has played men’s internationals on a regular basis, most frequently against the Czech Republic and Netherlands.

A full domestic club competition has yet to be developed but teams based in Brussels and outlying areas have crossed the border to play competitive games.

In 2019, the Brussels Falcons fly the flag for the sport with a men’s team who support two junior clubs, the Panthers and the Bears.

The Falcons, like their predecessors in the capital, the Gorillas, are looking into playing in the men’s competition in the Netherlands to gain regular games.

“We played a memorable international against Malta at Headingley as a curtain-raiser to a Super League game which showed that you can dream big,” Kazadi continued.

Zakaria Zoubir will take over the running of the BRLA as an interim lead and Francois Gillet the lead for development in the Wallonie–Bruxelles region.
Belgium RL has also engaged in the RLEF’s technical programme, part-funded by the European Union’s Erasmus+ grant.

“On behalf of the European and International Federations, I’d like to publically thank Yves-Michael for his unstinting services to rugby league in Belgium,” said RLIF global general manager, Danny Kazandjian, who worked with Kazadi to help establish the sport.

“He’s one of dozens of unsung heroes and deserves public accolade for the work he has done to establish the sport in an unfamiliar environment and, often, against the odds.”