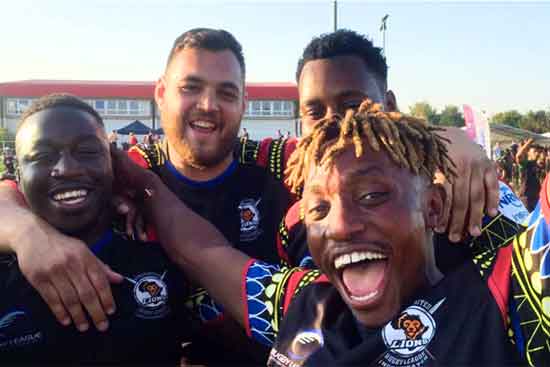 THE coach of a team of African-Australian immigrants which won a rugby league Nines tournament in London on Sunday has called on the South Sudanese community of Melbourne to embrace the movement, known as Africa United.

The African Lions team, featuring nine players who had flown in from Australia complemented by members of the local London African community, beat another team made up of participants from disadvantaged communities, the Roots team from the United States, in the London Nines at West Ham.

They overcame all sorts of difficulties including the withdrawal of several players from their traveling party and the cancellation of their accommodation, to win the final 12-4.

“I want everyone in Australia to be proud of these boys,” said coach Steve Warwick.

“In Melbourne the South Sudanese community has had some bad publicity of late. If the community there could get behind these guys and get involved in what we’re doing, I’m not saying it will fix everything but it will help people see them in a different light.”

Since starting his organisation, Warwick has seen a number of players join NRL clubs and the sport start in several African countries. His next aim is to establish a domestic competition in South Sudan.

With Roots Rugby aimed at providing opportunities for the African American community, the final was a celebration of the continent’s diaspora.

The Roots men and women qualified by winning the Carolina Nines earlier this year and the women took out their division in London, powering past the Royal Air Force 24-6 in the final.

Many of the Roots men and women have received rugby college scholarships as a result of their potential shown in the teams.

Lithuania’s rugby league debut was delayed when their round one opponents, hosts Newham Dockers, could only muster three players for the first match of the day. But the new boys went on to dominate the men’s social division before being beaten on the bell by London Skolars, 14-10, in the final.

The most serious injury of the afternoon was a broken nose – but unfortunately the young lady involved is getting married next weekend.