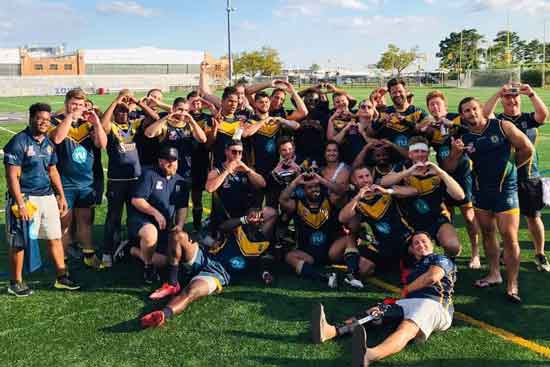 The Brooklyn Kings have been crowned 2019 USA Rugby League (USARL) national champions with a tight 12-6 win against the former title holders Jacksonville Axemen.

Two tries to one tells the story of a low-scoring but high intensity, defensive-oriented matchup Saturday at the Aviator Sports & Events Center in Brooklyn, New York.

“A lot of blokes have put in a lot of effort for a long time, so it feels good,” said Kings head coach Brent Richardson. “Every year we’ve gotten one step closer and this was the next step, so everyone is pretty happy about it.”

The game got underway with the Axemen actually crossing the line first, but the try was disallowed. From that point, the Kings got on the front foot and kept possession to start to build sustained pressure, which led to their first try by centre Brandon Anderson to make it 4-0 with around ten minutes gone.

The match, which turned out to be a pretty good spectacle for fans who turned up, produced some enterprising play by both teams on both sides of the ball but again it was the homeside that got the better of things.

Halfback Matt Brewer finished off a movement by dotting down in the try zone and then converted his own score to extend Brooklyn’s lead to 10-0 through the end of the first quarter.

Sensing that they needed to be the next team to get on the scoresheet, the Axemen lifted their intensity and were rewarded just before the halftime break with a try to backrower Jye Montgomery. Hooker and goalkicker Nathan Richter did what he has done all season long and added the extras to close the gap to 10-6.

As time expired to end the first half, the teams went into the main intermission with no change to the score.

The second forty was almost a carbon copy of the first with both teams making multiple line breaks but neither was able to capitalize due to some big hits and punishing defence that thrilled the crowd.

Jacksonville’s big forward Khaliq Webb, who had pummeled defences throughout the season, was himself unceremoniously dumped onto the Floyd Bennett Field turf in a display of heavy tackling by the Kings.

As has been the case lately, the Axemen were their own worst enemies at times giving up a slew of penalties from the play-the-ball and markers not squaring up, and unfortunately for them, one of those infringements gifted another two points to Brooklyn goalkicker Brewer, who stretched the Kings’ lead to 12-6 by the midway point of the second half.

Realising that their grip on the national title was starting to loosen, the Axemen ratcheted things up another notch to try to even things out, but in doing so, dropped the ball on numerous occasions leading to more frustration. And on top of that, they were caught in possession of the ball on the last tackle of their sets five or six times.

“Right at the end we still had an opportunity to win but they defended it and full credit to them,” said Jacksonville head coach Sean Rutgerson.

There was no more scoring by the time the final whistle blew, with the Brooklyn Kings hanging on to clinch their very first USARL national championship.

It was a replay of last year’s Grand Final, which the Axemen won handily. It was also the final game stateside for Brooklyn coach Richardson before he returns to Sydney, and he admitted their success tastes very sweet.

“It had nothing to do with revenge. It was more about wanting to be the best team in this league rather than beating the Jacksonville Axemen,” he said. “I think it’s more about doing a better job of playing Brooklyn Kings football which we were disappointed in last year.”

Magnanimous in defeat, Jacksonville’s co-owner Drew Slover and coach Rutgerson both congratulated the Kings on their well-earned victory.

“They did enough to win. They kept it really simple and basically hung onto the ball,” added Rutgerson. “Obviously congratulations to them. They deserved the win because they played better.”

Coincidentally, the result means both teams have dropped only one game apiece in the last two seasons, and on both occasions, it was the national championship decider.