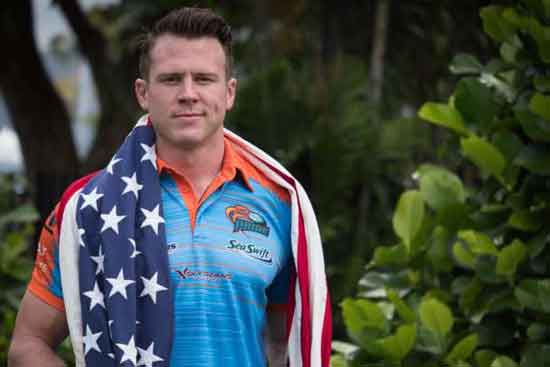 USA Hawks player Joe Eichner admits that it feels surreal to be the first American-born player to play in the Intrust Super Cup.

He made his debut for the Northern Pride last weekend against the Burleigh Bears.

“I guess I hadn’t really thought about it to be honest but it’s quite a surreal feeling to be the first,” says Eichner.

“It was never my goal to be the first American born ISC player but it’s definitely a bonus to the overall experience. There’s a heap of talent back in the States and I only hope that the fellas back home decide to showcase their abilities over here as well.”

He’s not the first American to link up with a Q-Cup team. Three US-based players spent the 2012 season with the Ipswich Jets as part of a player exchange program established by the former US national governing body, the American National Rugby League (AMNRL).

Josh Rice, Jayson Rego and Michael Garvey were placed with the Jets, and while none played at the Q-Cup level, they did get game time with the reserve grade FOGs team.

Ex-American football player turned rugby league convert Silas Redd also went to the Jets last year but didn’t stay as he opted to return to the US to take up a job with the NFL.

Eichner started this season playing for the Pride’s feeder team Brothers RLFC in the Cairns District Rugby League competition. This is his second year playing in Australia after spending the 2018 season with the Junee Diesels in the New South Wales Group 9 competition.

“I set a goal for myself when I first came to Australia and it was to play at Cup level whether it was NSW or Q Cup,” he continues.

“When I got to Cairns, I realized I wanted to make my impact by playing for the Northern Pride and it was going take a heap of work to earn it. It was a bit of an overwhelming feeling to finally achieve that goal and I wouldn’t have it any other way.”

He has certainly made a mark for himself since the start of this season. First, he was selected to represent Cairns in the Foley Shield, a two-day tournament involving teams from Mackay, Townsville and Cairns. The Pride took notice of his performances and signed him up as a developmental player.

From there he made the North Queensland Marlins select side to play in another representative carnival on the Gold Coast. While training with the Pride, he continued playing for Brothers in the hopes of getting called up and eventually that happened.

“I wasn’t quite sure what to expect when I signed on with Brothers and moved to Cairns, but I knew I had made the right decision once I got here,” he adds.

“Paul Stevens is the head coach of A grade and has made a huge impact on my game. My skills were pretty rough when I first showed up to preseason and he’s spent a lot of time working with me to improve my overall game.

“He’s really honest about where your skills are lacking but at the same time is also very helpful in fixing those weaknesses. Training with a higher level of talent at the Pride this season has been massive in helping me improve my game.”

Eichner isn’t the first USA national team player to play for the Pride. Before him, Mark Cantoni was with the Pride from 2008-2011.

The Pride is a feeder team for the NRL’s North Queensland Cowboys, and while the American backrower may harbour dreams of one day playing in the NRL, he’s realistic enough to know that getting a shot at game time in the best rugby league competition in the world is more than likely a very long way off.

“I haven’t even considered it to be honest, I’m just trying to enjoy the moment. Maybe when I get a full season of ISC games under my belt will I even fantasize about playing at that level. Right now, I just want to take it all in and do my best.”

It has been a remarkable career so far for the affable Floridian who first started playing the game in 2010 at the University of North Florida.

During his time studying at UNF, Eichner joined the Jacksonville Axemen in the USA Rugby League (USARL) and had three seasons with them from 2014-2016. In two of those years (2014, 2016) the Axemen made the USARL championship game, but finished runners-up.

He then had a stint with the Toronto Wolfpack, as well as the Underbank Rangers, in 2017, before heading down under in 2018.

Eichner has been a regular starter for the USA Hawks since 2016.