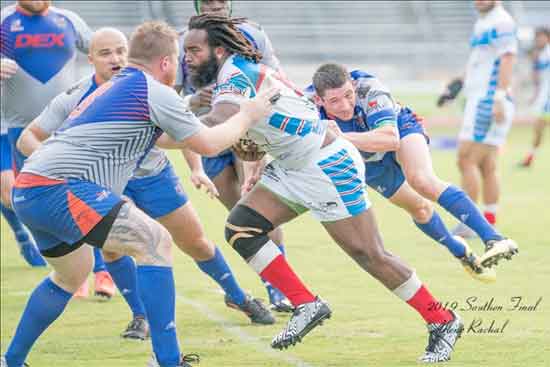 The 2019 USA Rugby League (USARL) national championship game will be a replay of the 2018 iteration with the defending champion Jacksonville Axemen facing off against the Brooklyn Kings.

The difference this year is that the game will be played on the Kings’ home turf, literally.

In the North matchup, the Kings spread their scoring reasonably evenly across the 80 minutes. They jumped out to a 10-0 lead by the end of the first quarter and went into the halftime break with a 26-0 cushion.

The second forty saw more of the same with the 13s having few answers to Brooklyn’s non-stop pressure.

Brooklyn’s backrower and national team representative Jay Robinson was named Man-of-the-Match for putting in another top performance. Halfback Matt Brewer, winger Marcus Satavu and frontrower Jim Stubbs, who came off the bench, all had standout games for the Kings.

Brooklyn head coach Brent Richardson says in spite of what the final scoreline might suggest, it was a tough hitout and was just what his team needed after having the previous week off when the Northern Virginia (NOVA) Eagles forfeited their quarterfinal.

The Kings made it to their first ever USARL national championship game in 2018 and in the end lost by 40 points to the Axemen. According to Richardson, a lot of it had to do with inexperience, which won’t be the case this year.

“I don’t think we have to change too much different. I just think we need to make sure we’re up for it,” says Richardson.

“I think a lot of inexperience got us last year. Young blokes playing a grand final in front of a big crowd down south, so I think that takes a bit of pressure off with a lot of these blokes playing in that environment before.”

In the South Conference final, Jacksonville was given another stern test by Tampa, the second time in as many weeks.

The Axemen eventually won by five tries to one, although they trailed for most of the first half before lock Khalial Harris finally got Jacksonville on the board with a converted try inside the dying stages for a 6-2 lead at the main break.

Axemen head coach Sean Rutgerson says it was the kind of matchup his side needed at this point of the season.

“It was a good game,” he says. “It was great for the crowd to watch because it was tight, a grind, neither side was giving in and there was plenty of good contact.”

Despite their stellar effort in the first forty, the Mayhem couldn’t keep pace with the Axemen in the second half, particularly in the last quarter of the game.

“The first half of this game was probably the best half I’ve seen us play this year,” said Tampa CEO Billy Neilson. “We made a few mistakes in the second half and Jacksonville is too good of a team to let you off when you do that.”

Rutgerson continues that playing in this year’s grand final will require a different approach by his team.

“It’s going to be a big challenge for us going up there like for them last year coming down to us,” he adds. “It’s massive because of costs and logistics and playing on a turf field, which we’ve played on in Atlanta, but obviously we’re not used to it.”

It won’t be played at the Kings’ regular home ground, but instead at the Aviator Sports & Events Center at Floyd Bennett Field in Brooklyn. It’s a multi-sport recreational complex that features two full-size state-of-the art turf fields.