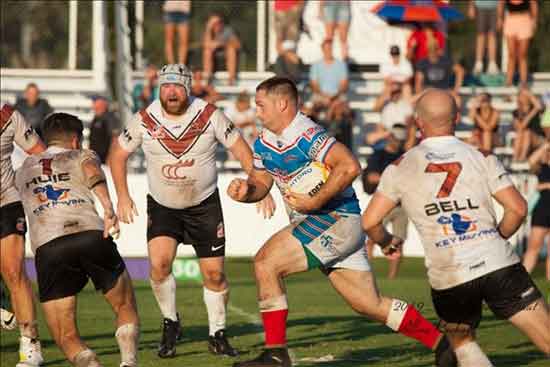 Not unexpectedly, the only two unbeaten teams in the USA Rugby League (USARL) domestic clubs competition are just one win away from a repeat of last year’s championship game.

The Brooklyn Kings and Jacksonville Axemen both opened the first round of this year’s playoffs with victories, although in contrasting styles.

In the North Conference, the #1 seeded Kings were slated to host #4 Northern Virginia (NOVA) Eagles in the big apple but the game ended up in yet another forfeit, this time by NOVA.

According to USARL LLC chairman Danny Hanson, “Eagles had too many injuries and could only find six healthy players to travel.”

That means the Kings move on to the North championship final this Saturday when they will be at home to the #2 seeded Boston 13s.

Boston advanced by virtue of a 44-22 win against #4 Delaware Black Foxes.

“We played our best game of the season, we were only down by six at the half,” said Delaware founder Bjorn Haglid.

“We have tremendous growth in the club. Our core group of players is more around eight to ten, so getting better. We didn’t finish where we hoped but the boys are hungry and already talking about planning for next summer.”

In the South Conference, the #1 seed and defending national champions Jacksonville scored another lopsided victory, blanking a game Southwest Florida Copperheads 68-0. The Axemen posted 12 tries en route to their win.

“I want to commend the Copperheads for their enthusiasm,” said Jacksonville head coach Sean Rutgerson.

“What I’m happy with is our players’ discipline. We knew they were going to come up and try and upset us. They had nothing to lose and we were expecting anything and that’s what we got.”

In the other South semifinal, the Tampa Mayhem thumped the first-year team Lakeland Renegades 68-6.

“They put an old-fashioned whooping on us, but we’ve learned a lot in our first season,” said Renegades captain David Ulch.

He says the next major thing on the calendar is the All Star game in September and they’re hoping some of their players get picked for the South.

Jacksonville will host Tampa in the South Conference final on Saturday night in what will be a repeat of the last game of the regular season in which the Mayhem genuinely tested the Axemen and coach Rutgerson thinks because of that, it promises to be a very good game.

“I’m expecting Tampa to come with everything again and it’ll be real exciting for our last home game of the season,” he added.

The winners of the conference finals will move on to the USARL national championship game on Saturday, August 24. This year’s Grand Final will be hosted by the North’s finalists.