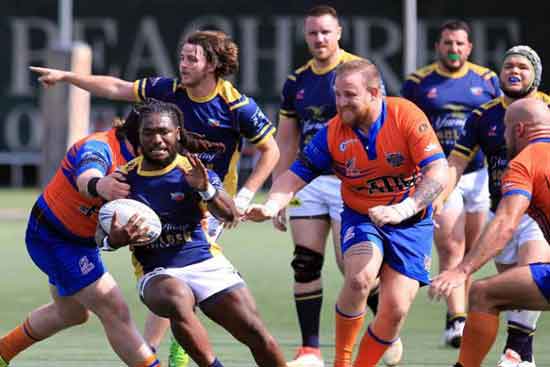 In a move indicative of the ongoing interruptions that have marred the USA Rugby League (USARL) South Conference this season, the Atlanta Rhinos have made the shock announcement that they have withdrawn from this year’s playoffs.

The Conference has been impacted by forfeits, cancellations and postponements on a regular basis that began almost from the opening week of the 2019 season.

In Atlanta’s case, the main issue has been the inability to field full strength squads, mainly for away games, which has forced the team to either pull the pin on matches or rely on other teams to provide them with players to make up the numbers.

Skipper and team owner Nick Newlin blames it partly on a lack of commitment from Rhinos’ players.

“To be honest, we don’t deserve it after cancelled games this season and never having more than 11 players to travel to an away game,” he says.

“The most we traveled with to an away game this season was 11, and that was the first game of the year in Lakeland, FL. Since then, the numbers have dwindled. Even though we had a respectable 16, 19, and 21 players available for our home games, the same commitment wasn’t there when it came to travel.”

He says the club lost several players after it won the USARL national championship in 2017 and their Australian coach headed back home. They also lost more players due to guys moving away at the end of last season.

“For some reason 7s was more of a draw this year and there are constant complaints about the travel, which is hard for anyone to be honest,” continues Newlin. “Three of four away games are seven to eight-hour drives.”

He says another possible reason for the low turnout is the emergence of the new Major League Rugby (MLR) club in Atlanta. The franchise is due to enter the MLR competition in 2020.

“Hard to tell if MLR had a direct impact, but we did have players as a part of their early training squad and players worried about risking injury with rugby league if they are in the possible crosshairs of Rugby Atlanta.

“I do think once they kick off this fall, and officially for the 2020 season, we will see a dip in numbers and recruiting new players with rugby experience due to the possibility of playing professionally.”

The Rhinos’ decision to pull out of the postseason has been confirmed by USARL LLC chairman Danny Hanson.

“The Rhinos will not be in the playoffs at their request, so the (Southwest Florida) Copperheads will move up to the fourth position,” he said.

There is still one round to go in the regular season, although Atlanta’s final game was last weekend against the Jacksonville Axemen.

The top four of the five teams in the South qualify for the playoffs. The Rhinos currently sit in third position in the standings and would have faced the prospect of another road trip in the semifinals on August 3.

Newlin is quite candid with his observations on what would help rugby league get on the front foot in the US.

“The biggest thing that would help us, the South Conference and probably the league as a whole, would be moving the season back to where we start late summer and play up until mid-November or so,” he adds.

“It would clear us from the MLR season that now goes into June and a lot of the 7s qualifying tournaments that are played in June/July.

“Let’s just be real with ourselves and admit that 90 percent of players that play in USARL also play union for a club team. At the end of the day, the rugby league game in the States needs the rugby union player.”