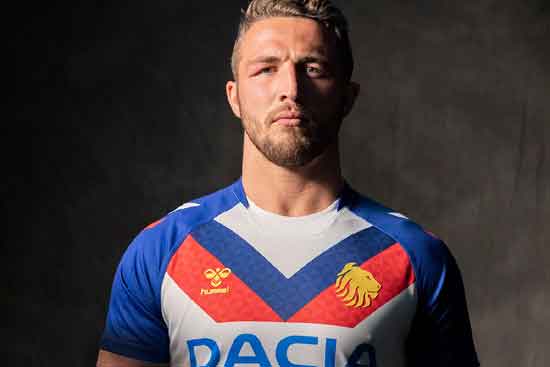 The Rugby Football League and Hummel have today unveiled the jersey that will be worn by the first Great Britain Rugby League Lions team to travel to the southern hemisphere since 2006 – while Dacia have been confirmed as principal partners.

The iconic blue and red V will return on a four-match tour of New Zealand and Papua New Guinea – and the jersey design has already brought memories flooding back of famous GB players and teams of the past, from the group of current players who were invited to film the launch video in Manchester and Sydney.

The video – titled The Pride Is Back – includes clips of classic moments such as Jonathan Davies’ try against Australia at Wembley in 1994, Clive Sullivan lifting the World Cup in 1972, and older footage of Lions teams entering the field at the Sydney Cricket Ground.

The new GB jersey, produced by renowned Danish sportswear brand Hummel, is available to order with a range of other merchandise from https://shop.rugby-league.com/#.

A rights-free image of the South Sydney forward Sam Burgess wearing the new Great Britain shirt is attached. Burgess is one of a handful of contenders for this autumn’s tour to have played for GB, winning two caps as an 18-year-old in the 2007 series against New Zealand.

The RFL are also delighted to confirm Dacia as principal partners for Great Britain this autumn – extending their relationship with Rugby League, which already includes all six teams in the England Performance Unit (Men’s, Women’s, Knights, Academy, Youth and Wheelchair), and Super League’s Dacia Magic Weekend.

Ralph Rimmer, the RFL’s Chief Executive, said: “Dacia has been a consistent champion of Rugby League across all levels of the sport, from the grassroots to the highest level and including every one of the England national teams. Their extension to the Great Britain Rugby League Lions further demonstrates their commitment and we’re sure this partnership will be a continued success.”

Ben Fletcher, the Head of Dacia UK, said: “We are delighted to be expanding our commitment to Rugby League with the addition of the Great British Rugby League Lions to our proud roster of partners. Dacia and Rugby League are the perfect fit: both share the same honest, down-to-earth, no-nonsense approach, and we are immensely proud to be supporting those values across all genders, ages and abilities with Rugby League and the England national teams.”

Great Britain will make a four-match tour of New Zealand and Papua New Guinea this autumn, returning to the international Rugby League stage for the first time since a 3-0 home series win against New Zealand in 2007 – and for the first Rugby League Lions tour of the southern hemisphere since the 2006 Tri-Nations Series.
The tour schedule is as follows: