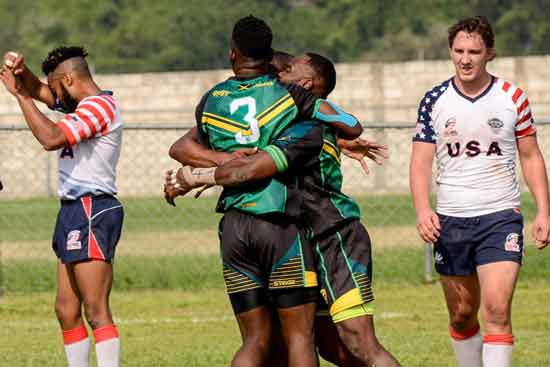 The England Lionhearts, a powerful representative team from the amateur leagues in England landed in Jamaica on Monday July 2 for a 14 day Tour of Jamaica. They will play three Test matches against local representative teams and participate in a 9-a-side tournament. The party contains 22 players and 10 staff, including a referee.

Jamaica is using the tour as part of its preparation pathway for the Rugby League World Cup in 2021. Fresh off the national team’s historic win against the USA on June 22, the local rugby league fraternity now turns its attention to facing the might of England’s best amateur players.

“This will be an even sterner test than the game against the USA. These English players grow up playing rugby league and we have never beaten a representative side from England. Playing against the Lionhearts will show local players how far or close they are to England’s best amateur players.

Many of our national players will see action is this series and I am keen to see how they handle the test. The Jamaica Select team will be fringe national players, whereas the Jamaica A team will feature a number of players who have already represented the Reggae Warriors, the full national team.”

Stuart Prior, manager of the Lionhearts said:
“We wanted to come to Jamaica because Jamaica qualified for the 2021 World Cup. We wanted to see the best domestic players Jamaica has on offer and to see them progress to playing in the World Cup beside the UK professional players. There are opportunities for local players to progress to the professional game if they have an exceptional skill base and a tour such as this will help the players to see where they are. While here we will be doing some coaching and referee clinics as well as well as donating gear to the local game.

We have settled in at the Hotel Four Season which is fantastic accommodations for us. The heat is stifling, but we are looking forward to our first game on Thursday and to see how we will manage in the heat. We need to go out there and put our sets together and give the Jamaicans a good game.”

The tourist will play all their games at the UWI Mona Bowl football stadium. The first game is on Thursday July 4 at 5pm versus “Jamaica Select”. Their second outing will be Sunday July 7, when they face “Jamaica Select”, Kingston Reds and St. Catherine Blues in a mini 9-aside tournament. They play their second Test match against Parish Champions Kingston Reds on Wednesday, July 10. The Lionhearts round out their tour when they face “Jamaica A” on Saturday, July 13 at 3:30pm.