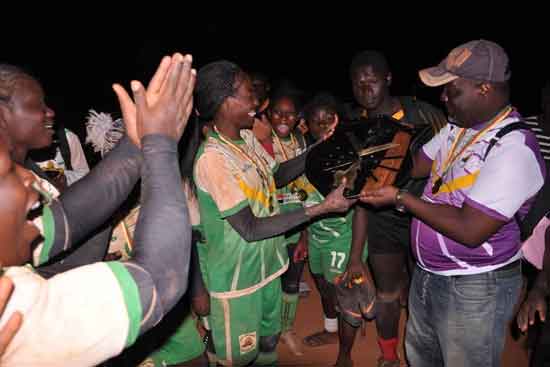 Four teams took part, Sahel – who made the final in their first-ever games – Rock and Gorila the others, on a day deemed a huge success by part-organiser, Cameroon RL head coach Khalil Njoya. “It was an amazing day for all. We had hundreds of people watching and many others asking about joining,” he said. “The atmosphere was astonishing.

“A lot of sacrifices were made to ensure this tournament happened but we will build upon it. Rugby league in Cameroon is growing in both the men’s and women’s game and soon our name will be the talk of the town. We intend to select a women’s national team from this start, the level showcased was extremely high.”

Njoya confirmed: “Afterwards we had women, men and children seeking to sign up to play rugby league and that is great news for the sport. Some are athletes from other sports such as football and handball and next year this tournament will be much bigger and better.”

Fellow organiser, Raiders head coach Paul Youmbi, added: “We worked very hard for this. This is only the first step and every single one of our ladies have put an immense effort in making this dream come true.
We would like to thank our main sponsors, “Société Générale Cameroon” for working with us and putting all their trust in the dream that is to grow rugby league in Cameroon, none of this would have taken place without them.

“Laureane Biville was the first to give our girls a dream to follow. The women put in late night shifts and early morning sessions to ensure victory and we are now planning to play in the London 9s later this year.”

Raiders’ Alvine Zoa won the award for the competition’s top try scorer as her side went through unbeaten.