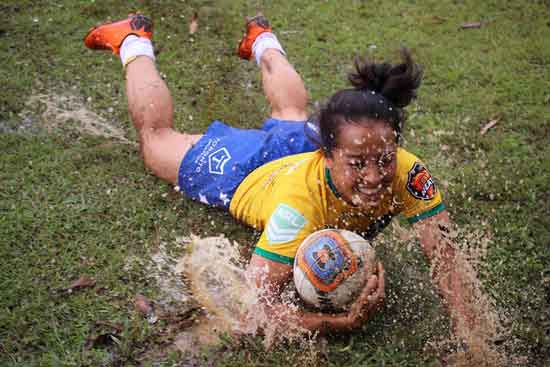 Rugby League might be new to Brazil but there is no denying that the code is starting to make a splash in a country where football rules.

It has been a 5 year journey to establish Rugby League in Brazil for Hugo Fróes the chief operating officer of the Brazilian Confederation of Rugby League. It all started with locals taking interest in Rugby League on the back of NRL broadcasts says Hugo Fróes.

Interest in Rugby League continued to grow and in 2015 Robert Burgin from Latin Heat an Australian based organisation promoting Rugby League throughout Latin American communities in Australia and abroad, donated jerseys. Burgin also enlightened the Brazilian’s on the finer points and rules surrounding rugby league.

Fast forward to 2018 and the first Brazilian Rugby League festival took place in São Paulo. The NRL provided officials with the assistance of Tas Baitieri from the APRLC. Together Robert Burgin and Hugo Fróes organised the Festival and arranged the required equipment to make the tournament a success.

The tournament saw 30 games of 13-a-side and 9-a-side rugby league being played. The Festival involved Brazilian clubs along with teams from Argentina and Colombia. The team categories included  men’s, women’s and youth. To put the icing on the cake Brazil were winners in all categories.

In 2019 the sport continues to grow in Brazil. This year the national championship will have 8 men’s and 4 women’s teams. They have already exceeded the number of teams registered in Brazil 9s played in Rio. In addition to the Women’s competition with more than 60 participating Brazil now has the largest rugby league grassroots in Latin America.

In the background the RLIF with the assistance of Australia provided a Coaching and Referee course. More then 25 people attended the course. Brazil is soon to be confirmed as the affiliate member of the Rugby League International Federation. This will make Brazil the 2nd nation in Latin America to achieve RLIF membership status. Chile were the first to obtain membership in 2018.

When ask what the future holds for Rugby League in Brazil Hugo Fróes replied “That all depend on us, we do everything, the national championships, courses, translation of rules to Portuguese along with promoting the game. We just need our effort to be recognised and we can have an international calendar with the support of RLIF, so that way we can motivate more people to enter the game and have more sponsors.”

Now the rugby league world waits with anticipation to see how far the Brazilian Confederation of Rugby League can take the sport in Brazil once they are confirmed as an affiliate member of the Rugby League International Federation. Rugby League fans would love to see Brazil participating in the Rugby League World Cup qualifying process in the not to distant future.