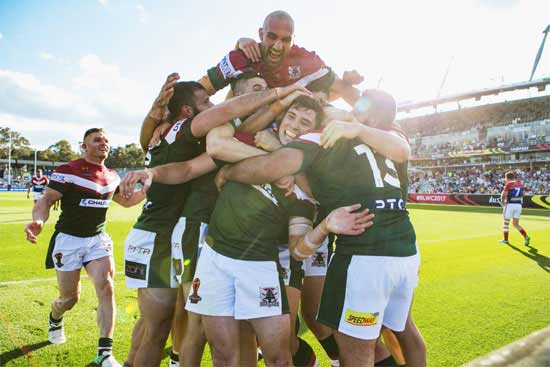 Controversy rears its ugly head again as Rugby League starts a round of international matches and it is the players from Lebanon that are in the firing line Bets.com.au reports today.

Lebanon is due to play Fiji on Saturday, and the players have threatened to cover up the logo of the governing body of Lebanese Rugby League on their shirts with tape. The protest is about the way that the sport is being managed and run in the nation. The Cedar’s players feel quite strongly about the way it is going, and want to make the gesture in protest about it. However, they have been threatened with criminal prosecution if they do so.

The LRFL released a statement about the incident saying “The Lebanese public prosecutor’s office has been made aware of the incident and will launch an investigation in coordination with the LRLF. It is a criminal offence to denigrate the national emblem of the Republic of Lebanon.”

The statement further went on to say that it would seek to charge the players with significant monetary fines if they went ahead with the protest. The players struck back at the news of the potential prosecution by saying that instead of covering up the logo, they would seek to just boycott the match instead.

The game is due to be played in Australia on Saturday in Sydney, but the West Tigers player Farah spoke out about the game and the players feelings saying “I’m not sure what sort of jurisdiction they have to carry out those threats, but we have spoken about it. And if that’s the case, we have got some players here that don’t want to cover up the badge, and we will seriously think about not taking to the field this weekend. We are as a playing group united in demanding change. Let’s hope that we can push the International Federation into some action. We don’t want to go to jail, so we just won’t play.”

The players specifically are protesting about the recent elections to the board of the LRFL, and they are also claiming that they have failed to take advantage of the team’s recent success in the World Cup. The Cedars narrowly lost to Tonga by two points in the quarterfinals of the World Cup, an excellent finish for the team.

The emblem of the LRFL, which features on the shirts of every player for the squad, features the classic Cedar tree logo of the Lebanese National Emblem. It is the covering up of this that is said to be a criminal act, and it is what the LRFL is seeking to prevent from happening. The LRFL’s full statement included them saying “Any player who conceals the Cedars badge – which is the emblem the federation selected to be worn by the representative of al Watan, the nation – will face misconduct charges. And The Lebanese public prosecutor’s office has been made aware of the incident and will launch an investigation in coordination with the LRLF. It is a criminal offence to denigrate the national emblem of the Republic of Lebanon. “