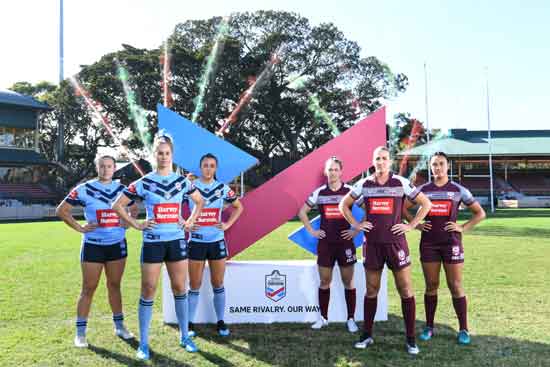 The Game will be broadcast live on TV via Channel 9 and Fox League from 7.30pm. For those in NZ the game can be watched via Sky NZ from 9.30pm. Check out our Rugby League Live page for stream and radio options.

For international viewers the game will also be available on Sky Sports UK and Fox US.

State of Origin hits fever pitch on both sides of the country this week, with the Holden Women’s State of Origin kicking off a weekend of rivalry without rival.

The women’s prime-time Friday night Origin will take place at North Sydney Oval, setting the scene for an exciting weekend of action for Queensland and New South Wales players and fans.

Harvey Norman New South Wales captain, Kezie Apps predicted an explosive match, with plenty of pride on the line for both teams.

“I’m incredibly honoured to be named Origin captain for my state,” Apps said.

“This is one of the biggest occasions of my career and it’s a match I circle on my calendar as an absolute must to be part of.

“Last year was unbelievable – running out to a packed North Sydney Oval and clinching a win for New South Wales and I know that our entire team is focussed on doing the same again this year.”

Queensland stalwart, Steph Hancock said the Maroons had other ideas and wouldn’t be intimidated by the away crowd or the opposition.

“I’ve been fortunate to have experienced a lot of big moments as part of this game, but for me, there’s nothing quite like putting on the Queensland jersey and running out to represent your family, friends and state,” Hancock said.

“We weren’t happy with the result against New South Wales last year. Rest assured, we won’t be giving them any free points and we’re ready to take the shield back to Queensland.”

Sydney singer and songwriter, Chloe Papandrea (known as Cxloe) will perform during half-time of Origin, with the Triple J unearthed artist excited to be part of the experience.

“I am so excited and honoured to be singing at the Holden Women’s State Of Origin in my hometown, Sydney,” Cxloe said.

“As a female artist in a male dominated industry, I understand the importance behind supporting women. It makes me so happy to support these women in a traditionally male sport and highlight how incredibly strong they are!”

Prior to Origin, the Queensland and New South Wales under 18s women’s teams will take the field, with free entry for those under 15 years of age and adults from $10 to watch the double-header.

At the conclusion of the Origin match, the field will be open for fans to run on and greet their Origin heroes, with 500 mini-footballs to be given away to kick around.

Holden Women’s State of Origin tickets are available at www.nrl.com/tickets.

The 2019 Holden Women’s State of Origin is proudly supported by naming sponsor, Holden, together with the New South Wales Government, via its tourism and major events arm, Destination New South Wales.