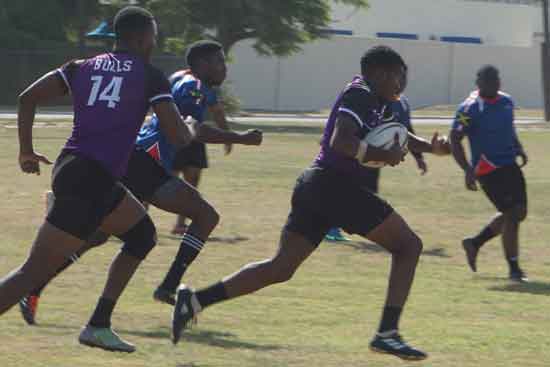 Photo Credit: Shamoy Stewart of Washington Blvd. Bulls on their way to scoring a try in Round 1.

West Kingston Hyenas were overpowered 34-4 by a slick GC Foster Lions outfit in the Championship’s opening game. National player, Antonio “The Destroyer” Baker, did most of the damage for the Lions with an incredible 16 point haul from 4 tries. He got support from Stephen Scott with 8 points from a try and a goal, while Clive Henry completed the Lion’s scoring with a try. The Hyenas battled gallantly, but only the experienced Ryan Hylton could muster a reply with his team’s lone try.

Game two was expected to be a close affair between Washington Blvd. Bulls and Spanish Town Vikings; however, the Bulls came away with a comfortable 32-2 victory over their rivals. For the Bulls, Lawrence Drummond top scored with 8 points from 4 goals. He got good support from Orlando Messado, Shamoy Stewart, Kile Nembhard and Shaquille Pollack, each scoring a try. Spanish Town’s points came from Captain Raheem Sweeney who kicked a goal.

In the feature game of the day, defending champions Duhaney Park Redsharks took the field against the Jamaica Defence Force Warriors. But it was a somber occasion for the Redsharks who have been shaken by the recent sudden passing of teammate and national player Leon Thomas. The Redsharks built a 16-0 lead through tries from Mark Edwards, Jade Harrison and Ryan Grant who also kicked two goals. However, with 15 minutes remaining, the Army men dug deep and executed a blistering comeback through converted tries from Shamar Creary, Shaneal Brown and Edgar Herbine, Nickolai Kennedy top scored for the winners with the 3 goals for 6 points.

The Championship continues this Saturday, June 15, with GC Foster hosting Liguanea Dragons at 4:00pm.  Meanwhile, there will be a double header at Duhaney Park Mini Stadium with the Bulls facing the Hyenas at 2:00pm and the Redsharks taking on the Vikings at 4:00.