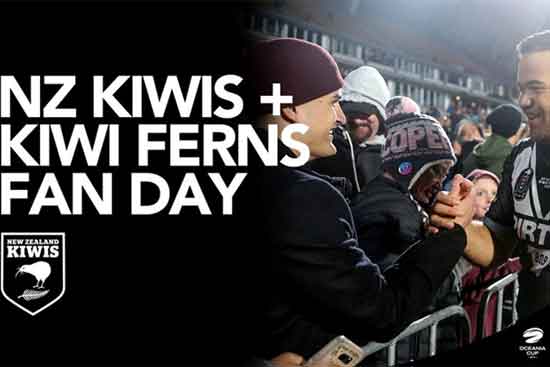 The NZ Kiwis and Kiwi Ferns are giving their supporters a chance to meet the teams at a fan day at Auckland’s SKYCITY ahead of the blockbuster double header at Mt Smart on June 22.

The opportunity to meet the fans on Tuesday June 18, forms a key part of the preparations for both the Kiwi Ferns and Kiwis ahead of their Tests against Fetu Samoa and Mate Ma’a Tonga respectively.

The event, starting at 3:30pm under the Sky Tower at SKYCITY in Auckland’s CBD, will feature signing and selfie stations where fans can meet the players in person.

New Zealand Rugby League CEO Greg Peters says: “It’s really exciting to have both the Kiwi Ferns and Kiwis playing again on home soil in what are going to be two huge Test matches.”

“It’s great the fans get the chance to meet the stars of both teams at the fan day, as these opportunities not only mean a lot to our players but they’re an integral part of the test build-up.”

“We look forward to seeing plenty of supporters in black and white at the fan day and then again on the Saturday as our Kiwi teams take the field in front of a packed Mt Smart Stadium.”