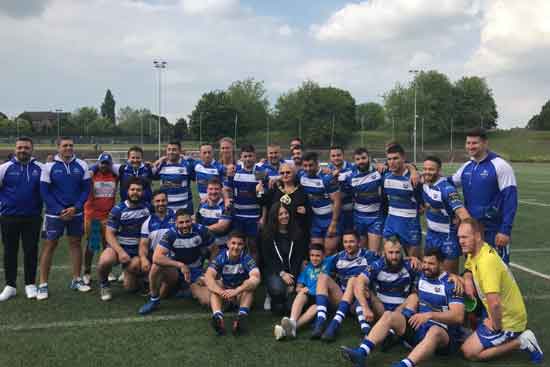 A dominant first half, which saw them 32-0 ahead at the break, saw Greece qualify for the final stages of the 2021 World Cup European qualifiers, where they will face Scotland and Russia, with the top two sides advancing. They were also crowned European Championship C winners.

The gallant Norwegians, with centres Kristoffer Borsheim and Fredrik Nordtun outstanding, rallied in the second half at the New River Stadium, London, but had left themselves too much to do.

The spine of the Greek side proved too strong, with teenage South Sydney junior, hooker Peter Mamouzelos the star with four of their ten tries. “Coming over here has been a wonderful experience,” he said. “I’ve never been to Europe before. Going into camp in Greece with the team, I learned a lot about my culture and to come here and get the win was fantastic; it was a team effort. The whole family has got behind me, the support has been fantastic.”

In a blistering start, it took seven minutes for Greece to open the scoring when excellent Robert Tuliatu, the London Skolar on home territory, threw a dummy and fooled three defenders to cross; Jordan Meads, who directed play throughout, surprisingly skewing the conversion from in front of the posts, his sole miss.

With the Norwegians expending too much effort in defence, on the back of a penalty, Tuliatu and Meads combined to send Terry Constantinou over to score out wide in the 16th minute. Two minutes later, full back Constantinou broke clear and got the ball away to put paratrooper Theodoros Nianiakas into the open. The Aris Eagles backrower, who only started playing the sport six months ago, was unchallenged on his 35-metre run to the try line.

Nordtun was sin binned in the 26th minute for trying to delay the play after another Greek raid, and the blue and whites made the Vikings pay when Meads put centre Dimos Kartsonakis over in the corner, Meads landing the side line conversion to make it 20-0.

Mamouzelos dominated the end of the opening 40 with two tries in quick succession, the first capitalising on a Meads break and bamboozling defenders from close in, the second a superb solo effort from 70 metres, latching on to a Tuliatu midfield offload.

Norway, who stayed out on the field at half time, showed increasing resolve at the start of the second period to hint at a possible stunning comeback.

At the end of their best set, engineered by Kritsian Nordin-Skipnes and Brett Harvey, skipper Kristoffer Milligan dived over from dummy half on the last tackle, and with Joshua Skidmore-Hornby making an impact off the bench, a long pass set Casey Diggs free on the right; Nordtun curling over the conversion.

Mamouzelos completed a genuine hat-trick, diving over from dummy-half to give the Greeks breathing space, but Borsheim capitalised on a blind side play to superbly dummy his way over and, after Tuliatu had knocked on over the line, Nordtun took Simon Viljoen’s long pass to cross on the left to make it 38-20.

Norway lost possession from the restart and Greece made sure of the victory when Mamouzelos, playing at half-back, collected the ball from the scrum and fed Meads who put Constantinou over in the corner; Meads with the touchline goal.

A superb passage from the Greeks saw Mamouzelos begin a move from inside his own half. He linked up with Tuliatu who sent Meads into the clear and Mamouzelos backed up to score between the posts; Meads’ goal bringing up the Hellenic half century.

Mamouzelos then turned provider, racing down the side line before stepping inside Stephen Mwinkar. The Norwegian custodian managed to hold on to him, but the Souths tyro was able to get the ball away for Nianiakas to cross for his second try.

Norway were rewarded for their perseverance, and had the consolation of winning the second half, when they spread the ball wide and released former athlete Diggs, who sprinted 60 metres for a score to delight their fans and numerous dignitaries.