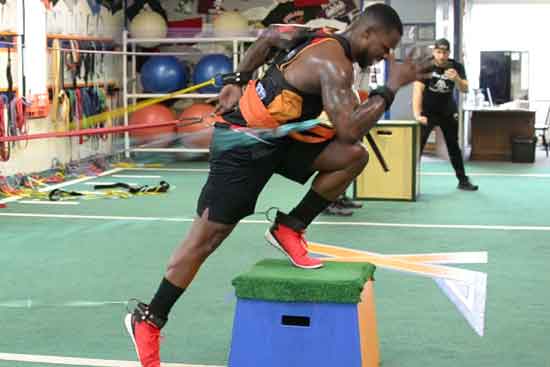 American rugby league player Monte Gaddis is following in the footsteps of Valentine Holmes, in a sense, as he strives to keep his professional football dream alive.

Gaddis, who has spent this offseason trying to catch the attention of his hometown Cleveland Browns NFL franchise, will try out for two Canadian Football League (CFL) teams within the space of a week.

He worked out for the Hamilton Tiger-Cats this past weekend in Cleveland and will follow that with a second tryout for the Toronto Argonauts in Akron, Ohio on Saturday.

Gaddis, who had a season with Red Star Belgrade prior to returning to the United States, is hellbent on cracking it in professional football.

He played American football at college. He was a running back at the University of Maryland and middle linebacker at Towson University. Following that, he had a stint in the Indoor Football League with the Iowa Barnstormers, before converting to rugby league and playing for Dewsbury in the UK and then Red Star.

To date, his efforts to get a tryout with the Browns haven’t been fruitful so he has turned his attention to the CFL, where two of his former college teammates are playing.

“I actually just mentioned it to Frank (Beltre) since I knew he has been with the Argos for a while now,” says Gaddis. “I also have another college teammate, Darius Victor, who just signed with the Ti-Cats a few weeks ago.

“Us Towson guys always look out for each other or help out wherever we can. It would be awesome to reunite. I know it’s not an easy process, but I am willing to put the work in.”

He says he’ll be competing for spots as a running back or fullback, as well as a special teams player. He believes that having played in college will give him an edge since he knows a linebacker’s tendencies, plus being a running back that can tackle is a great asset for special teams.

“The RB coach DJ Harper loved my professionalism and was surprised with my rugby league background,” continues Gaddis.

“We talked about growing relationships with players and coaches. Also, how it’s all about who you know. He told me they just drafted a running back so it will be tough, but hopefully my special teams play can get me a shot.”

The CFL differs from the NFL in that it is a three-down game, as opposed to four downs in the American version, but Gaddis doesn’t see himself having trouble making the adjustment.

“I don’t think it will take long for me to adjust to CFL,” he adds. “I have played college football to Polish League Football to Indoor Football to both codes of rugby. I am a fast learner. Plus, I’ve been watching the game since 2014, I am up for the challenge.”

Gaddis says whether or not he gets a shot in the CFL, it doesn’t mean he’s not still interested in rugby league.

“I love league. It’s just time for it to take a backseat now and see what the football side of things has for me. Rugby League is my Plan B, I’m just taking the best opportunities for myself and family right now.

“Of course, I have thought about nines, that’s where my game really excels, in space. Playing 9s in the Netherlands both seasons really raised eyebrows in the league world.

“Since I have not played for a domestic team here in the USA, I was not qualified to play or be selected in the Americas Rugby League 9s tournament. There is still an opportunity for the Carolina 9s, but only time will tell.”