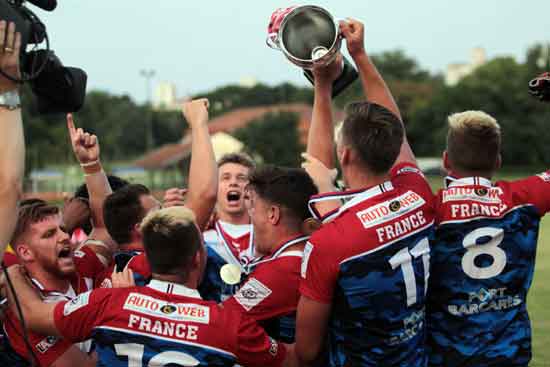 Eight nations will again contest the U19s European Championship in 2020, with Italy hosting the event for the first time. North East coastal city Lignano Sabbiadoro will be the base for the biennial event which will take place from 3-13 September 2020.

Reigning champions France, who won the last tournament held in Serbia, go into it favourites along with England, who were runners-up in a tightly-fought final in 2018. The seven top ranked nations from the last tournament – also including Wales, Scotland, Serbia, Ireland and Italy – will automatically qualify for the 2020 tournament, should they wish to participate.

Ukraine, who finished in eighth position, are likely to go through qualification games, as other nations have expressed interest in being included.

“On behalf of the Federazione Italia Rugby League board, I would like to express our sincere gratitude and thanks to the RLEF for awarding the tournament to Italy,” said FIRL president Orazio D’arro. “We consider the U19s European Championship to be a vital and fundamental event and building block which contributes to the development of the sport within the region. We are genuinely honoured to be bestowed with running this competition.”

All the nations will stay at the Bella Italia Sports Village, which can hold 2,800 people across 13 hotels, and at least eight of the games will be held at the Stadio Communale G. Teghil, a complex with a 5,000 capacity stadium in Lignano.

RLEF General Manager Chris Thair noted: “FIRL put together a compelling bid as part of our tender process and will deliver a fantastic tournament. To commemorate this working relationship and help build experience within our workforce, the RLEF will – for the first time – run joint tournament directors, including FIRL’s Tiziano Franchini. Our aim is to ensure the young people involved have a great life experience regardless of results.”