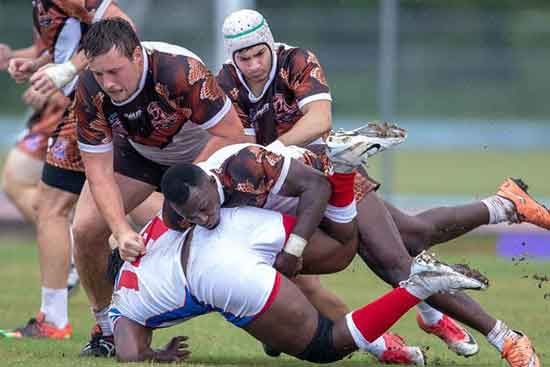 These days with funding playing such a big part of club sustainability, it’s not uncommon to see GoFundMe campaigns spring up online whenever a club or players need money for one reason or another.

Very often it’s based on the necessity of having to cover travel and accommodation costs of getting a team to and from a big tournament.

In the Americas, we have seen the USA, Canada and Jamaica all set up GoFundMe drives at one time or another to get their national teams to things such as a Rugby League World Cup qualifying series.

For Tier II countries, it has virtually become the norm as their cash reserves are somewhat limited in comparison to Tier I nations. To a large extent they rely on grants from the Rugby League International Federation (RLIF), which are not forthcoming on a regular basis.

On top of that, the international governing body is hardly comparable to say the NFL which makes money hand over fist.

So, that being the reality, local clubs in Tier II countries have an even tougher time trying to raise money for just the basics such as providing kits for their players, renting home grounds and covering the costs of away games.

In America, all 11 domestic clubs in the USA Rugby League (USARL) are in that very predicament, but the founder and CEO of one of them has come up with what he believes is a doable solution, and one that other clubs can copy – not only those in the US, but anywhere in the world.

Curtis Goddard founded the Southwest Florida Copperheads in 2018. They compete in the USARL’s South Conference and as they’re based in the Fort Myers region of the Sunshine State, all of their away games are long road trips, which of course means they are relatively costly.

His monetizing solution is largely based on membership development. He says the concept is that there has to be a global grassroots movement.

“The first thing I asked myself is what is it that rugby league clubs have to offer?” he says. “It’s essentially what we produce as content that can be co-branded with, enjoyed etc.

“Stemming from the idea that we create content, like news for example, I needed to determine what people engage with, what they spend their money on and what other successful clubs are doing.

“A lot of clubs use a kind of Costco membership idea that I got to experience a bit in Australia in which they give specific perks to people who sign up with them like their season ticket holders.”

Goddard goes on to say that when trying to grow rugby league, particularly in the case of a new club in an emerging market, it comes down to money and that money largely comes from the households of people who support the game.

And he stresses that a club’s fan base can be located anywhere on the planet, not just in its own backyard.

“We want to grow the game and we want to be global just like rugby union, so how do we get there? Can we ask the NRL or Super League to give us a bunch of money? No. That’s not realistic because they’re a business, they have to make good business decisions and their clubs rely on their fans.

“If you really want to grow rugby league, you have to do it on a member level, and it has to be completely grassroots. You need baseline support from across the globe and people who want to make it a global game.

“If the appetite’s not there, it won’t succeed. But if everybody understands it’s something they want to see happen, ultimately, they’ll have to pool their resources together whether it’s $2 for a club or some kind of global foundation.”

He continues that in the age of the internet and social media, it’s easy for clubs to post on their websites exactly what they intend to do with money pledged to them by their fans and for fans to keep tabs on what’s going on at the clubs.

Goddard says in line with that, he has built a website for the Copperheads https://www.copperheadsrlfc.com on which all kinds of club information will be posted, including youth development and starting a touch football competition for U12s.

He says the club now has a membership drive up and running and the annual commitment is $20 per person.

“As we continue to increase the membership, the more control I’m willing to relinquish as an owner like for instance what our kit looks like. I went through a big exercise in this offseason as to what next season’s kit is going to look like and we had people voting on it and interacting and engaging with our brand.

“There’s no reason why they can’t become a member and not just give me $20 for nothing, but also receive something like the dual interaction. Having a say in decision-making with the club and having a direct line to me.

“That’s what I’m betting on. I believe that if this gets out and people understand what the overarching goal is, then it can be done.”