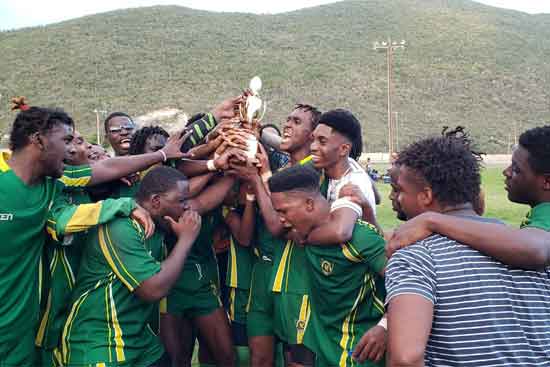 Having lost their previous two Grand Finals appearance, the team from Mountain View was composed and resilient throughout a cracking final. Their main weapon was Akeem Murray, whose sniping runs and passes from dummy half wreaked havoc on CMU’s defence, earning him match MVP honours.

CMU was first to get on the score sheet after 5minutes when powerful center Shaquiel Pollack crashed over on the left edge. Alpachini Mignott kicked the conversion for the extra two points. Exed responded in spectacular style with 16 unanswered points as Murray, Donhue Sinclair, Towayne Dawkins and Kahil Green all made their way over the try line. The first half ended that way, EXED 16, CMU 6.

CMU came out a different team in the second half and launched a series of raids which paid dividends when Orlando Messado and Cares Stephenson bullied their way to the try line in the 48th and 54th minute. Mignott again converted the extras to give CMU a slim 18-16 lead with 25 minutes on the clock.

Both teams then had a number of close chances to score, however, both CMU’s Messado and EXED’s Joseph Berry fumbled the ball at the line, leaving the game intricately poised with 10 minutes remaining. Then, with 9 minutes on the clock, EXED’s scrum-half Owen Linton scored the game winner when he barged over the try line on the fourth tackle. Green stepped up and nailed the conversion which accounted for the final points of the game.

“The boys really wanted this one; their preparation was geared towards improving every game. It was pleasing to see almost all the players playing their best game in the Grand Finals. I give commendations to CMU for a real high quality game. The Excelsior Community College will definitely celebrate this victory.”

GC Foster College claimed third place with a close 28-22 victory over the University of the West Indies Pelicans. GC Foster was led by Adrian Thomas who bagged 2 tries while Joseph Starr and Shane Miller scored two each for UWI.