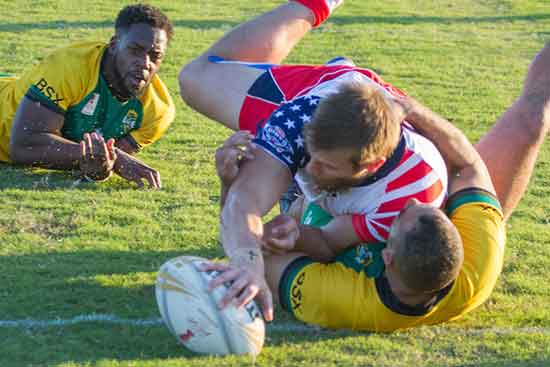 Rugby League’s so-called international weekend in June is designed to try to lift the sport’s global profile, and in line with that, the Rugby League International Federation (RLIF) has designated a bunch of games to be played in different locales.

One such contest will be held in Kingston, Jamaica, when the hometown Reggae Warriors host the USA Hawks.

It will be the very first time that the US has played the Jamaicans on their home soil. Every other match between the two has been played on the North American continent.

The history between the two is only a short ten years, but the Americans have had things go mostly their way over that time span.

It all started back in 2009 when Jamaica burst onto the international scene in their first ever game in the inaugural Atlantic Cup. The Reggae Warriors faced off against the then USA Tomahawks in Jacksonville, Florida.

Jamaica put in a good showing on that November day and actually led 12-10 at halftime, only to eventually fall short by 15 points.

In the ensuing ten years, the Tomahawks/Hawks have amassed a 6-1 all-time win-loss record against Jamaica. That one loss, however, was the game that counted the most to date, as it was last November’s winner takes all 2021 Rugby League World Cup qualifying series decider.

That result clinched a spot for Jamaica in the RLWC for the very first time and relegated the US to a World playoff group repechage against the winner from the Asia-Pacific/Middle East Africa group. That match will decide the final berth for the 2021 RLWC and is expected to be played in the United States towards the end of this year.

In the meantime, the Reggae Warriors are excited to host the Americans in June.

“Jamaica is looking forward to hosting the USA as it gives our fans a great opportunity to watch their heroes at home,” said Jamaica Rugby League Association director of rugby Romeo Monteith.

“It has been a tough journey playing seven consecutive times away to the US between 2009-2018 and we are happy to finally get one at home. We believe it’s vital for countries to have home games in order to grow their own fan base and develop awareness locally.

“Kingston is the birthplace of rugby league in Jamaica and so it’s a special occasion. It will be our second time staging an international in the city and we hope the trajectory will continue.”

There is likely to be payback on the minds of the Hawks’ players as their loss in the RLWCQ final has left a bitter taste in their mouths even though it was almost six months ago.

USA head coach Sean Rutgerson says his guys played below par that day and he expects a get square mindset could well be on the cards.

“I want them to have that and be upset about what happened last year,” he said. “We’ve got a few things we need to fix up all across the board and we’ll be doing that.”

The only other time Jamaica has played a Test match at home was against Canada in 2017. The home team emerged victorious on that occasion by 28-14.