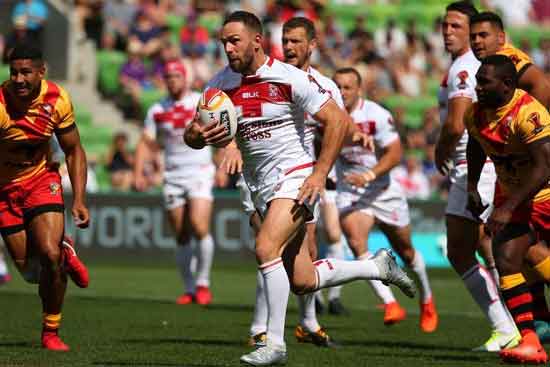 As you’ll know all too well, we’re not long removed from the 2017 Rugby League World Cup final, where we saw England lose 6-0 to co-hosts Australia in Brisbane.

But at least England managed to stop a fourth consecutive Australia versus New Zealand final. Now, we look to the 2021 Rugby League World Cup in England with optimism. The progression of the team makes them one of the favourites to hoist the World Cup next.

While the stars of the early rounds could very well be Jamaica in the Rugby League World Cup, our eyes will be fixed on the performances of England, who are expected to be amongst the leaders in the odds to win the tournament. The England team is currently young and talented enough to remain mostly intact over the next couple of years. Also, many of them should be able to attain some top-level winning experience by 2021, which could prove to be invaluable.

One of the most exciting groups of players earning their roles in the most recent set of autumn internationals are the four players from St Helens. There’s 28-year-old wing Tommy Makinson, 24-year-old centre Mark Percival, 28-year-old versatile stand-off Jonny Lomax, and 23-year-old prop Luke Thompson. All four will still be of the right age to be playing at their best when the 2021 Rugby League World Cup rolls around.

As it stands, these English players make up core parts of a St Helens team tipped for greatness this season. Many see St Helens as frontrunners with the Warrington Wolves to win the Challenge Cup 2019. Recent performances from Lomax and Percival have cemented St Helens as a favourite, and with both teams at odds of 9/2 to win the cup as of 22nd March, this divided race for victory makes for a good opportunity to use UK free bets for sports betting, with up to £100 in bet credits available.

If these core players keep playing to a high level, they should be able to win some silverware over the next few years. This year is certainly one when the four English internationals could experience winning a trophy. But will it be enough when it comes to the World Cup?

The England team is trending in the right direction. However, history is against them. Of the 15 Rugby League World Cups, Australia has won 11 and New Zealand has won once. Great Britain claimed the trophy three times, but England has never won it on their own.

Australia is still sitting at the very top of the RLIF world rankings; however, England have managed to remain in second, with New Zealand just behind in third. Throughout 2018, England showed a lot of promise. Their progress was very encouraging and somewhat unprecedented.

England will, hopefully, continue to improve over the next couple of years. If they do get good enough to make it to the final, it will be very tough. If not before, England will likely meet Australia in the final. In 18 head-to-heads, England has only won twice against the Aussies.

It seems as though England may have to pull off a big underdog victory to win the next World Cup.