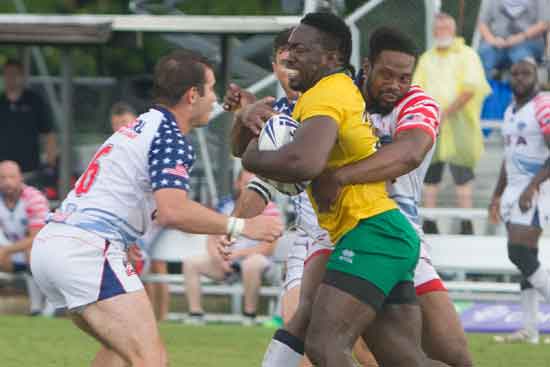 History will be made on 22 June when Jamaica play their first-ever home international against the USA, at the Mona Bowl Field in Kingston (kick off 3.30pm), in an escalation of one of international rugby league’s burgeoning rivalries.

In their previous meeting in Florida last November, the Reggae Warriors won 16-10 to claim a place in the 2021 World Cup, with the Hawks now consigned to a repechage at the end of this year. The match will be part of the sport’s mid-year international weekend.

“It is a ground-breaking moment for us and we look forward to hosting the USA after eight consecutive matches between our countries over there going back to 2009,” said Jamaica director of rugby and national head coach Romeo Monteith. “It is the start of our preparations the World Cup in 2021 and a fantastic opportunity to showcase the sport in front of our fans and partners, this is a major moment for the JRLA.”

Previously, Jamaica have played home matches against Canada in 2017 and the British Amateur RL Association tourists.

USA Hawks head coach Sean Rutgerson commented: “I’m happy for my players to have a get-square on their minds and many will have ground to make up as I look at my squad to play in the next round of qualifiers. Of late, we’ve only been to Canada or playing at home so it’s good for us to get out and experience something completely different.”

The Hawks expect to arrive in the Jamaican capital the day before the game and both sides look like being made up completely of domestic players.

The United States and Jamaica will also play in the inaugural Americas 9s at Lamport Stadium, Toronto, on 18 May.