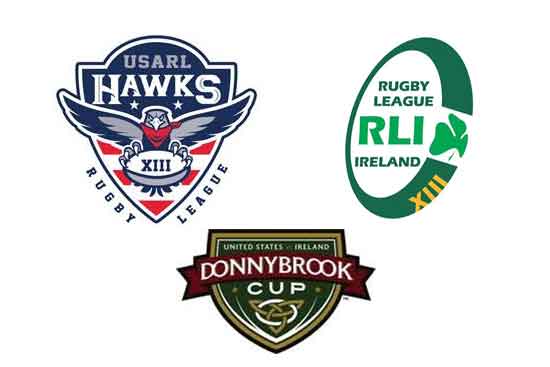 Approaching St Patrick’s Day has triggered memories of the Donnybrook Cup. It was an annual rugby league international between the United States and Ireland.

That was when the American National Rugby League (AMNRL) was the national governing body. It was replaced by the current NGB, USA Rugby League (USARL), which took over running the game stateside in 2014.

Reflecting on the Donnybrook Cup has also prompted a review of the state of play before and since the most recent change in governing bodies.

First though, here’s a brief history lesson to get you up to speed. The original structured domestic competition started in the late 1980s via the Tri-Counties Rugby League. It consisted of three teams in Canada and one in New York state.

The first recognized NGB was Super League America (SLA), which was established in 1997. It became the United States Rugby League (USRL) in 2000 which morphed into the AMNRL in 2001. That body oversaw the game until midway through 2014, although in 2011 seven teams split from the competition and set up their own breakaway league, the USARL.

The main reason for that was discontent among the breakaway clubs with the way in which the AMNRL was managing the game. The clubs felt they weren’t getting enough say in things.

Finally, in 2014, the AMNRL relinquished its Rugby League International Federation (RLIF) membership and folded as an organization, which is when the USARL took over as the recognized governing body in America.

During these tumultuous times, the USA’s national team has gone through changes. In 1993, the American Patriots played at the World Sevens in Sydney, then in the mid-1990s, the Tomahawks began competing regularly on the international scene. They played Canada in an annual Can-Am series, renamed the Colonial Cup in 2010 when the Canadians emerged from a ten-year hiatus, as well as the Donnybrook Cup.

Think what you like about the AMNRL, but it should be credited for at least trying to expand the game in America. It started a Midwest Conference that staged an exhibition season in 2010, while also initiating a competition in Hawaii. In 2012, the AMNRL expanded to American Samoa where it set up a developmental program.

As part of the AMNRL’s expansion plans for the Pacific, Honolulu hosted the inaugural Ohana Cup in 2012 when the US played Tonga. In fact, the very last game that the US national team played as the Tomahawks was an Ohana Cup match against Samoa in the summer of 2014, which they won 18-12.

Between then and 2016, the tournament’s format was tweaked. It saw an Australian Indigenous All-Stars side, a New South Wales Police team, along with representative sides from Canada, Samoa and Fiji, plus the Hawaii Chiefs Select side all taking part.

So, now that you’re all caught up, here’s a look at the USA’s international record.

It started unofficially with a tour of Australasia by the American All-Stars in 1953, but that team wasn’t an official US side. A follow-up team including many of the so-called All-Stars went to France in 1954 where they lost an unofficial Test to Les Chanticleers.

Along the way they played the likes of Russia, Wales, Cook Islands, Scotland and Japan, as well as Italy, Lebanon and Morocco. Towards the end of their run, the Tomahawks squared off against South Africa and Jamaica.

Perhaps one of their most famous games was against Australia in Philadelphia in 2004. The Kangaroos stopped off in the States on their way back from the Tri-Nations tournament in the UK and much to their surprise were losing at halftime before going on to post a 36-24 win.

In the autumn of 2014, the re-branded USA Hawks started their run under the new NGB, USARL, with an unflattering 52-14 thumping by the Canadians in Toronto.

Including that one, they have played a total of 15 internationals, compiling a win-loss record of 8-7. That doesn’t include a loss to the Leeds Rhinos in an exhibition game in 2016.

Arguably one common denominator to use when comparing the national teams’ records under their respective NGBs is their World Cup records. The Tomahawks played in the 2013 RLWC and the Hawks made it to the 2017 RLWC.

The AMNRL chose not to consider players from the breakaway USARL competition when picking the 2013 team so cast their net far and wide looking for eligible players, and in doing so, found some gems in the NRL and English Super League.

The Tomahawks were coached by NRL coach Terry Matterson and went 2-1 in their group games to advance to the quarterfinals where they were blanked by eventual champions Australia.

Four years later, the USARL adopted a vastly different approach to its selection process. Their focus was on picking developmental players who would bring their World Cup experience back to their US clubs.

Consequently, there was only one NRL player, Bureta Faraimo, and no Super League guys in the squad. There was a New South Wales Premiership player, Sam Carson, along with Ryan Burroughs and Joe Eichner from the UK’s League 1. The rest were from the USARL’s domestic competition.

That team was coached by Super League coach Brian McDermott and went 0-3 in the pool stages. Two of the losses were big shutouts.

So, depending on which school of thought you subscribe to, perhaps the moral of the story is if you want to win you can’t afford to have a lax selection process.