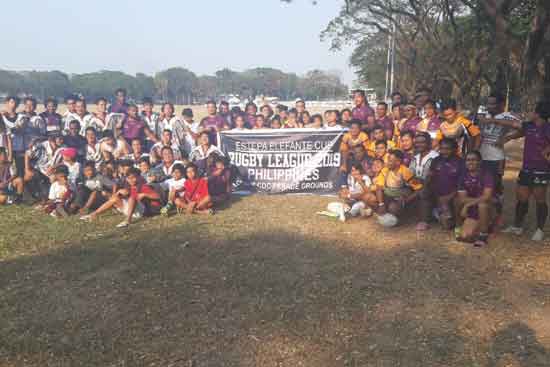 The 3rd season of the Estepa Elefante Cup was held at the Clark CDC Parade Grounds under warm humid weather condition that did not suppress the enthusiasm of players who have been waiting with excitement for the kick of the 2019 season.

The day kicked off with a children’s clinic to introduce 80 kids from the indigenous Aetas Village and the Anonas Elemntary School to Rugby League. These children come from some of the poorest families in the region. With many having been displaced from their homes from the recent typhoons that have hit the Philippines.

The children were put through their paces by Jamaica Oliver from ISLA Touch Club and her team of volunteers and were assisted by the senior players from Manila Storm and the new boys on the block the Clark Brothers XIII.

The children were shown the fundamentals of catching and passing and were able to play a modified non-contact version of the game. Even 2 hours under the sun did not dampen their enthusiasms and interest for the game. With many watching from the side lines to support their new big brothers in the Manila Storm and Clark Brothers XIII teams. Their cheering was part of the successful efforts to nurture interest in the game in the Philippines.

The first game between the two champions of 2018 the North Luzon and Cavite Tigers was an exciting see-sawing game that saw the lead change hands numerous times. Despite a few physical challenges the game ended up in a deserved 24-24 draw. The results could not have been fairer considering the efforts and display of sportsmanship by both teams. There were plenty of excellent passing and good line running that kept the supporters of both teams on the edge of their seat.

The second game commenced with a friendly handshake between the Manila Storm and Clark Brothers XIII. But within 2 minutes of the game starting the Clark Brothers put brotherhood aside when they raced in for an early try after a series of quick passes. The Clark Brother raced ahead with 6 unanswered tries in the first half.

Manila Storm regrouped at half time with some very powerful half time motivation talks from their coach. They came back with four excellent well work tries to take the score to 16 – 24 before the Clark Brothers finished off a late try in the corner, with the final score being 30 -16!

The opening round of the 3rd Season of the Estepa Elefante Cup was a great day for Rugby League in the Philippines with the involvement of seniors, women and children !

See you next month for the second round, where we are anticipating a bigger and better
Competition!

A big shout out to PNRL board in Australia, Mackay Brothers Football Club Inc, Envy Bistro Angeles and sponsor Erick Paul Estepa Elefante for all their support. With special thanks to all participants and children for a great day playing “the Greatest Game of All”!