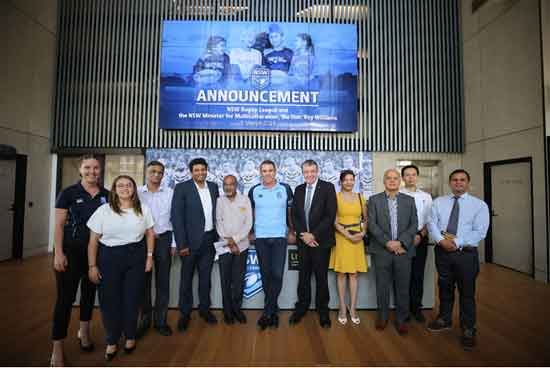 The NSW Minister for Multiculturalism, the Hon. Ray Williams, pledged his Government’s support for the Rugby League program targeted at breaking down barriers and social isolation for people from diverse communities, in particular for children of Indian and Chinese background.

“CALD Try League” is based on a pilot program run by the NSW Rugby League in 2018 in Blacktown for a mixed gender 10-week social inclusion program for U7 and U9 ages, where 30 per cent of participants were of Indian descent. They learned to play the game in a fun, non-competitive format.

NSW Rugby League Chief Executive David Trodden said the substantial funding support would enable the grassroots initiative to be further developed and implemented in a sustainable program that could have far-reaching benefits for the children and their parents that go beyond the football field.

“While State of Origin is the most visible part of the organisation, we are a community-based organisation with more than 100,000 participants playing our game across the state,” said Trodden at the announcement at the NSWRL’s Centre of Excellence at Sydney Olympic Park.

“This program is designed to make culturally and linguistically diverse sections of our community feel as welcome as they should.”

Minister Williams said he was delighted to be supporting this Rugby League program targeted at breaking down barriers and social isolation for people from diverse communities.

“The NSW Liberals and Nationals Government is committed to the expansion of the Try League program which promotes social cohesion.

“This funding will encourage greater participation in Rugby League by creating a welcoming atmosphere, particularly for people of Indian and Chinese backgrounds.”

Programs will be held across school terms leading into the Junior Rugby League season to encourage participants to continue their social inclusion experience.