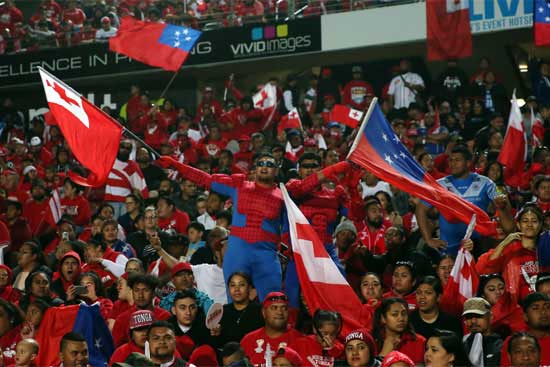 New Zealand is set to get a massive injection of international rugby league matches in 2019, with the Great Britain Rugby League Lions tour of New Zealand and Papua New Guinea, and the inaugural Oceania Cup getting the green light.

The first match of the Oceania Cup has the New Zealand Kiwis going head-to-head with Mate Ma’a Tonga at Mt Smart in the re-match that everyone has been waiting for. The Kiwi Ferns will also take on a Pacific Island team on the same night. This mid-season clash is one of three Tests the Kiwis will play in New Zealand, with the end-of-season Test against the Kangaroos being played in Wollongong.

The inaugural Oceania Cup will be made up of Pool A – comprising New Zealand, Australia, and Tonga – and Pool B – made up of Samoa, Fiji and Papua New Guinea.

Organisers also announced that the Great Britain Rugby League Lions will be in action in the southern hemisphere for the first time in 13 years, playing two Test matches against New Zealand (2 November at Eden Park and 9 November at Christchurch Stadium) and Tests against Tonga and Papua New Guinea.

New Zealand Rugby League CEO Greg Peters said he was “excited to see all the hard work behind the scenes come into fruition with more international rugby league content locked in for our country and our fans.”

“We could not be doing this without the support of New Zealand Government, the host cities and NZRL’s commercial partners so I’m incredibly grateful to all of them for making this possible.”

“Our rugby league community in New Zealand has been hoping for more international and Kiwis fixtures in our back yard for a while now so I’m pleased we’re able to deliver on this for them,”

“New Zealand Rugby League is also delighted to be bringing such an event to New Zealand that will also benefit the teams throughout the Pacific.”

“This international program is both exciting and ground-breaking and it is great to see the Great Britain Rugby League Lions following in the historic footprints of previous tours.”
“The Oceania Cup is an important step in creating a full international calendar that fans, players and commercial partners can enjoy.”

“It has taken a huge amount of work to deliver this and I commend the efforts of all those who have brought us to this point. It is a great platform for the international game in the Asia Pacific Region.”
Rugby League Players’ Association (RLPA) Chief Executive Officer Ian Prendergast says the Oceania Cup and Great Britain Rugby League Lions are fantastic additions to the International Rugby League calendar.

“It is fantastic that there will be significant international content in 2019, including new properties in the Nines and the Oceania Cup, as well as the Great Britain Rugby League Lions touring down under.”

“It reflects the enhanced profile, interest and competitiveness of International Rugby League. In particular, the Oceania Cup provides a tremendous new platform for the Pacific nations to compete on the world stage.”

“We have enjoyed working through the process with the RLIF and the nations to establish the schedule for 2019 and look forward to continuing these discussions when planning for future matches takes place.”

“The international game presents exciting opportunities for our members and through continued collaboration we look forward to further showcasing the wonderful rugby league talent we have in the game.”

“The return of the famous Great Britain jersey is something people have been talking about for a long time so this is an exciting announcement for us.”

“It’s 12 years since Great Britain last played a Test, and 13 since they last travelled to the southern hemisphere, for the Tri-Nations series of 2006.”

“There is such history and tradition around that Great Britain shirt, it’s great for the game to have it back and we’ll be committed to respecting and honouring that tradition.”

Note: Event organisers are grateful for the support for New Zealand government through the Major Events Development Fund, ATEED, H3 and ChristchurchNZ.