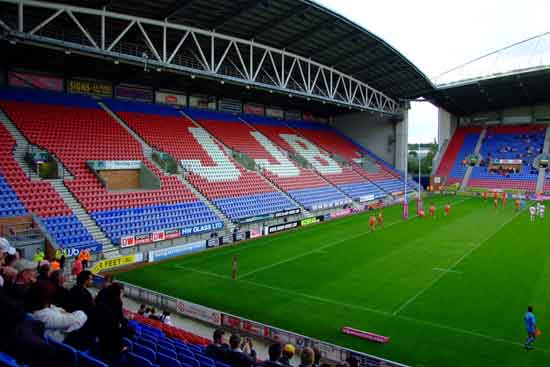 Australia’s National Rugby League (NRL) giants, Sydney Roosters bagged a record-equalling fourth World Club Challenge trophy with a comprehensive 20-8 victory over British Super League stars, Wigan Warriors. It is the second time that the Roosters have won the title by defeating the Warriors. The Roosters and the Warriors have been two of the most gifted rugby league club sides in the last couple of decades and it was great to see these two behemoths lock horns in the World Club Challenge 2019 at Wigan’s DW Stadium.

Wigan Warriors’ World Club Challenge successes have all come against Australian opposition in 1987, 1991, 1994 and, most recently, against the Cronulla Sharks in 2017. This year’s meeting between the northern and southern hemisphere champions had some added spice, given that the recently-appointed Wigan Warriors coach, Adrian Lam was coming up against his son, Lachlan, who was named in the Roosters’ line-up. Lam replaced departing head coach, Shaun Wane on a one-year temporary basis, with the Warriors forced to wait until the 2020/21 campaign to appoint Shaun Edwards as the club’s long-term head coach.

A Brett Morris-inspired Roosters made things look easy against Wigan

What makes the Roosters’ comfortable victory all the more impressive is the fact that the NRL 2019 campaign has not even started yet. Meanwhile Wigan had already played two competitive Super League games and had been through a gruelling pre-season training camp. Before the game, the Roosters’ head coach, Trent Robinson insisted that they had given the competition the respect it deserved. That was despite some people suggesting that the all-conquering NRL giants would take their foot off the gas after seven of the last nine World Club Challenge ties had been won by the southern hemisphere side.

Robinson, who has been at the helm of the Roosters since 2013, was proved right as his side came out of the starting blocks with speed and precision. More than 21,000 crammed into the DW Stadium – many of whom were on the Warriors’ side – to see the Roosters soar into a 10-0 lead courtesy of two slick tries from recent recruit, Brett Morris. Post-match, Robinson admitted this early ten-point lead was “the buffer that allowed [them] to hold on at the end” when the Warriors made their second-half rally.

The ten-point lead still remained at the half time break, but Tom Davies’ early second half try helped to reduce the arrears. However, Australian international, Brett Morris bagged his third try of the night to stretch Sydney’s lead further. It was all set up for a grandstand finish in the closing quarter-of-an-hour, when Liam Marshall finished smartly in the corner to leave the Warriors only eight points behind. Try as they might, Lam’s men knocked on the door to find a further chink in the Roosters’ armour, but they were all too easily rebuffed.

It was left to homegrown Roosters’ winger, Daniel Tupou, to add the finishing gloss to the scoreline with a late try that suppressed any hopes of a miraculous fightback from the home side. The World Club Challenge stage appears to suit experienced winger, Brett Morris, who scored two tries in his last final appearance in 2011 for St. George Illwarra Dragons – ironically against Wigan Warriors. Morris went one better in 2019 and despite him entering the twilight of his career, his try-scoring capabilities will be vital to the Roosters’ NRL 2019 challenge in the coming months.

The Roosters will kick-start their NRL 2019 season against the South Sydney Rabbitohs, starring Sam Burgess. It is already being billed as a big clash to determine whether the Rabbitohs are genuine competitors to the Roosters’ throne. There is no doubt that the Roosters have strengthened their squad sufficiently for NRL 2019. England rugby league international, Ryan Hall, has agreed a two-year deal with the Roosters, departing Leeds Rhinos where he had scored 231 tries in 327 competitive appearances since breaking into the Rhinos first team in 2007.

The Roosters also announced the homecoming of Angus Crichton from the South Sydney Rabbitohs. Crichton is a hot prospect and came through the junior ranks at the Roosters before turning down a big-money contract to hone his skills as a first-grade footballer at the Rabbitohs. As we have already discussed, Brett Morris also provided a timely reminder of his capabilities with a hat-trick of tries against Wigan Warriors and these signings, along with the Roosters’ unflappable performance at the DW Stadium, has well and truly cemented them as NRL Grand Final favourites, according to Oddschecker.

At the other end of the NRL, the likes of the Parramatta Eels and the Canberra Raiders are being tipped to contest for the wooden spoon. The Eels had a particularly bad 2018 campaign, after being tipped to compete in the upper echelons of the league. It is difficult to put your finger on what went wrong, but there is no doubt their defensive line looked porous and lacklustre, and the team line-ups lacked consistency and solidity week-in, week-out. It’s all the more confusing when you consider they are led by head coach, Brad Arthur, who has long been considered one of the finest coaches in the NRL at present. A similarly dismal 2019 campaign could be curtains for Arthur.

For too long the Canberra Raiders have also failed to reach their full potential. It has been a slippery slope for the Raiders down the NRL in recent seasons and few pundits anticipate them being able to challenge in 2019. 2018 was an injury-hit campaign for Ricky Stuart’s men but, nevertheless, too many of Stuart’s signings failed to perform and all too often found a way to throw away potentially-winnable positions in games. According to a recent fan survey by NRL, the Roosters are the only team to be widely predicted to finish the 2019 season as premiers, although North Queensland and Newcastle are tipped to push for finals berths after being inched out of the top eight in 2018.