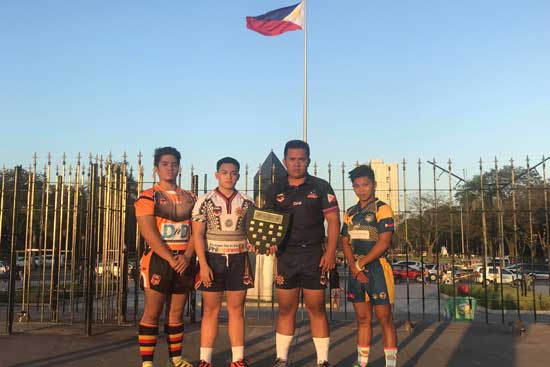 The 2019 Philippines National Rugby League, Estepa -Elefante competition kicks off on the 10th of March 2019 at the historic Clark CDC Parade Grounds.

This year’s competition will see 4 teams competing for the coveted trophy.

The PNRL would like to thank Reynaldo Nery who is in the Philippines distributing donated footy gear from his “Footy for Philippine” collection drive that he run out one of the local Commonwealth Bank branches in Sydney. The drive has helped kit out many of the new players in the 4 teams for this 3rd season.

North Luzon Hunters will challenge the Cavite Tigers in the first game. This will be a great match as the Hunters are the reigning 13s champions and the Tigers reigning 9s champions.

While foundation team Manila Storm will take on the new comers the Overgaard sponsored Clark Jets who are a team comprising majority of boys from a local orphanage.

All four teams have been working relentlessly in the off season on new recruits from all walks of life as well as training and preparing for the opening matches.

The two men’s game promises to be robust and exciting with each team comprising of exciting new Filipino recruits and seasoned hard hitting Islanders from PNG, FIJI and SAMOA.

It will be a fun filled eventful day starting with a children coaching clinic for the street orphans of Angeles and the Indigenous children of the Aetas Village conducted by the volunteers from the clubs. The children will then be paired up with their mentors who will share their experiences, knowledge and values of the game to our less fortunate future players.

Also for the first time in Philippines Rugby League history, there will also be introducing a women’s exhibition game to showcase the growing interest and potential of the sport.

We look forward to an exciting new chapter of the game in 2019, and we invite you and your family to come join us at the event from 10AM to 6 PM, at the Clark CDC Parade Ground.