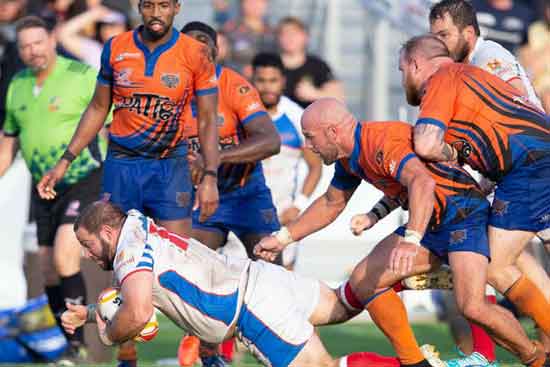 The good news is that there are enough referees to officiate during this year’s USA Rugby League (USARL) domestic competition, but on the flipside, administrators admit it is a struggle to attract new match officials.

There will be an expanded 12-team competition later this summer and while there are enough referees to cover the fixture list, the depth of match officials isn’t extensive enough to include touch judges for every game during the regular season.

That won’t be the case during the postseason, however, as of course there will be fewer games to cover.

USARL head of match officials Cody Kuxmann says it’s not something that’s unique to America, as attracting referees to any sport is currently on the downswing.

“In the United States the culture is very challenging for referees,” he says.

“If you look at anything from children’s sports to the fully professional, referees are criticized from every angle which leads to a position where why would anyone want to become a referee if all you’re going to get is negative feedback?

“I think the challenge is how do we go about developing people who want to become referees and make sure they’re getting the proper environment to ensure their growth and development as a match official?”

While that is a big enough challenge in and of itself, another issue rugby league administrators in America face is attracting more refs to the game in general.

Kuxmann is of the opinion that a good place to start is with former players who would like to continue contributing to the game.

He says another potential source is referees from other sports.

“Refereeing in America is very amateur when you look at it outside of the college and professional level and I think giving someone another opportunity to develop a skill that they enjoy might be one of the ways that we look at going forward.

“We’re talking about soccer or rugby union for instance.”

Assuming more referees can be attracted to rugby league during the US offseason, they will have to complete a referee’s course before they can officiate at a game. There will be a course offered in conjunction with the Carolina 9s tournament on the Labor Day weekend.

“The course allows them to learn the skills needed to become a referee and understand rugby league on a different level than if they were playing,” says Kuxmann.

He says the USARL is also considering running an extra course in both the North and South Conferences.

It has also been suggested that the US look at introducing a two-referee system based on what the NRL has done in Australia, although Kuxmann has some reservations about it being doable at this point in time.

“Currently a two-referee system would be something that we don’t have the sheer numbers for. That would be the first issue,” he adds.

“And with the league’s standing as it is right now, I don’t know that another referee over the play-the-ball would be something that would be a benefit.”

Something that the head of match officials is in favor of, however, is referee exchange programs.

During last November’s Rugby League World Cup qualifiers in Florida refs from the UK came over to provide guidance to their counterparts from the US, Canada and Jamaica, as well as to officiate in matches.

Kuxmann says the Americans and Canadians are now working on opportunities to get North American referees exposed to a higher level of officiating during this year’s international 9s series.