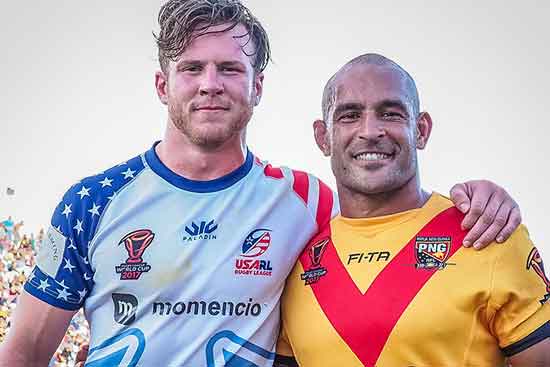 USA Hawk Joe Eichner is about to kick off his second year of rugby league in Australia and he has gone to Far North Queensland to do it.

The back-rower has signed on with the Brothers RLFC in Cairns.

After playing his first season with the Junee Diesels in New South Wales, he headed north to Bowen to complete three months of farm work in order to secure his second-year visa to remain in Australia.

Former Jacksonville Axemen teammate and Queenslander Daryl ‘Spinner’ Howland helped set up the work for Eichner by putting him in contact with the relevant people.

Howland also knew the American was looking for a new team to play with in the Sunshine State for the 2019 season and after Eichner had spoken with a few clubs, Howland put him in touch with Intrust Super Cup side Northern Pride.

After seeing video of Eichner playing for Junee during the 2018 season, the Pride set him up with their feeder team Cairns Brothers and from there they were able to strike a deal.

“Queensland is known for its love of the game and I’m thrilled to experience the footy culture here first hand.

“Far North Queensland has bred some of the toughest men to ever step on the pitch. The heat and humidity alone will be a task to overcome, let alone the big fellas looking to lay a shot on me.

“I can already tell that this year with Cairns Brothers RLFC will be an amazing experience and my abilities will grow with every challenge that lies ahead.”

They were crowned minor premiers after finishing at the top of the standings at the end of the 2018 regular season, but then were edged by Tully in the CDRL preliminary final.