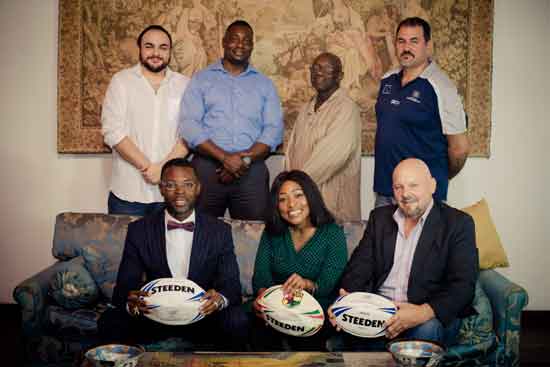 Nana Prempeh, an Ashanti Royal from Kumasi, has been made president of the Ghana Rugby League Federation.

In further exciting developments, the newly-elected GRLF board has committed to university, club and international competitions in 2019, as the sport continues to progress in the capital Accra and neighbouring city Tema.

“I am honoured and privileged to have been elected to preside over the board of the Ghana Rugby League Federation,” said Prempeh, who has played rugby in the UK and now operates in the mining and petroleum industries.

“Whilst much has been achieved over the last few years, there remains many exciting challenges ahead and I look forward to working with my fellow board members to continue growing rugby league both domestically and internationally.”

RLEF regional director Remond Safi was present at the GRLF AGM to ensure momentum is built upon, following on many months’ work by UK graduate Sam Leach to structure the organization. Whilst Safi’s visit concentrated on the Federation’s governance, planning and ensuring it has more political support, he also delivered coaching and match official clinics.

RLEF General Manager Chris Thair noted: “I’m delighted with the recent developments in Ghana. A lot of work has taken place prior to this point and it is with thanks to such as Sara Giwa-McNeil, wife of London Skolars director Hector McNeil, for her investment and patronage, that the sport is growing in the country.

“The RLEF is now defining a plan for the Middle East and Africa region which should see four new nations move from observer status to affiliate members in the next twelve months, which includes Ghana.”

Thair continued: “The support is now there, we would love to hear from Ghanaians residing elsewhere in the world, or those with an active interest in the country, who can join in making a difference to this wonderful part of the world.”

Ghana will hold inter-hall rugby league in the University of Ghana in March and April, followed by four clubs competing in the Ghana Championships between April and June. This is underpinned by a number of schools that play the sport and all of this activity will culminate in international games, planned for the Autumn period.