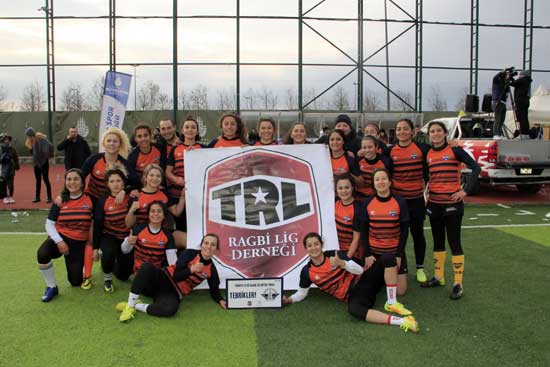 The Turkish Rugby League Association has reported considerable growth as the champions of the men’s and women’s games have been crowned. Kadikoy Bulls defeated Ankara Phrygians 28-18 in the men’s Grand Final, whilst Izmir Batı Gücü also defeated the Phrygians, 8-4, in a double-header staged at the IBB Maltepe Sahil Sport Center, in Istanbul.

“It has been an amazing season for Turkish Rugby League,” said president Gurol Yildiz. “The men’s competition increased from four teams to ten and we started a women’s league of four teams. The sport was played in five cities over an extended four month period. The TRLA is in a very good place to further look forward in 2019.”

Kadikoy, the first side formed in the country under TRLA driving force Julien Treu, remain in the vanguard. “It was a terrific season for us,” Treu said. “We were the first side outside of Serbia to make the Balkan Super League semi finals and four of our players appeared in the Emerging Nations World Championship. Because of the increased participation, the standard continues to go up, we cannot wait for the chance to defend our title.”

Izmir Batı Gücü women’s captain Zeynep Yalman commented: “Our team includes players from three cities; Muğla Sports Club, Eskişehir Çamlıca Sports Club and Hacettepe University Rugby (Ankara). Most of the players have been playing rugby 7s for many years, however, the International İstanbul Beach Tournament was the first time they played rugby league together, and we all loved it and wanted more. We all needed to get permission from third parties to sustain our unique hobby which requires great sacrifice, commitment and finance. For the first season of rugby league to be the champions is fantastic reward.

“Our long-term plans are to unite under an official club, regularly participate in Turkish Rugby League Association’s competitions, practice more and improve our skills and technical knowledge to keep moving ourselves and rugby league forward. We appreciate our families for their endless support and thank our manager Cenk Berkant and coaches Alp Yıldırım and Erdem Çağdaş for their love of rugby and believing in us.”

According to Ankara Phrygians president Kemal ege Gurkan: “The season was a big success with regard to developing grassroots rugby league and everyone who took part enjoyed it while learning along the way. This was also an historical inaugural season for us with both men’s and women’s teams making their way to the finals. Ankara looks forward to being part of an even bigger and better championship.“