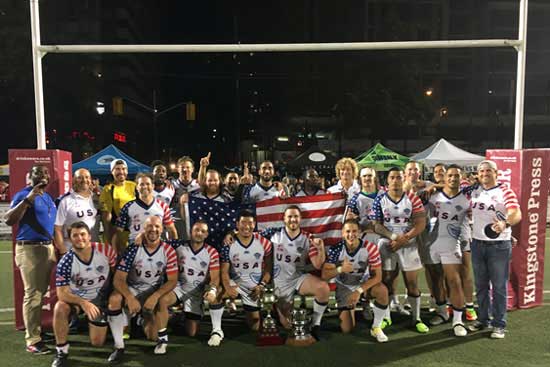 Now that 2018 is done and dusted, we thought it would be timely to look ahead to gauge what’s in store for rugby league in the USA in 2019.

At the conclusion of the 2018 USA Rugby League (USARL) season there were 11 domestic clubs, seven in the North Conference and four in the South and it is possible there may be more teams competing later this year.

“No clubs folding this year and there may be a possibility of one or two joining for 2019,” says USA Rugby League LLC chairman Danny Hanson.

“The AGM is set for 12-13 January in White Plains and we will know more after that meeting.”

One of the teams in the North, the Delaware Black Foxes, struggled to stay competitive last year as it was a constant battle to field a full-strength team week in and week out. Mounting pressures on co-founder and head coach Bjorn Haglid are such that he will not continue in the role in 2019.

“I’m stepping away and (former player) Ian Ferguson is taking over the helm,” Haglid told RugbyLeaguePlanet.

In the South, despite rumors to the contrary, it seems unlikely that the Central Florida Warriors will make a comeback after taking a hiatus in 2018, but again it’s early days, so time will tell.

However, there are suggestions that a new team might spring up in Lakeland, FL.

One of the big stories of 2018 was the establishment of the Southwest Florida Copperheads and while they didn’t win a game in the South Conference, they proved themselves to be a no-quit team and steadily improved as the season progressed.

Founder Curtis Goddard says they plan to be back in 2019 and are focused on raising money.

For argument’s sake, let’s say there will be twelve or thirteen teams in the competition in 2019. That is a very doable number and one that makes a lot of sense in a country like the United States where rugby league is still a fringe sport.

Regardless of how many teams are in the league, you can rest assured that USA Hawks head coach Sean Rutgerson (Jacksonville Axemen) and his assistant Brent Richardson (Brooklyn Kings) will be hellbent on making sure the domestic competition raises the bar in terms of the standard of play with one eye on the international season later in the year.

Speaking of which, the Rugby League Americas Championship should hopefully revert to its original format after last year’s aberration for the World Cup qualifying series.

Typically, the US plays games against Jamaica and Canada in late summer and early fall to determine the champions, as opposed to what took place in Jacksonville last November when the Reggae Warriors were declared champs after winning the 2021 RLWCQ.

The RLIF insisted on that format, condensing everything into four days in an effort to save money. Details including schedule, format and venues for 2019 are currently in the discussion stage.

Later this summer, the Midwest Rugby League (MWRL) has plans to resume its series of exhibition games as it sets the table for its envisaged application to formally join the USARL in 2020.

Last year, the Chicago Stockyarders played matches against a Cleveland Rugby League squad and Canadian provincial side Ontario, both in Chi-town, and this year there are plans in the works for a repeat of those two games, plus a couple of extra matches.

A start-up team in Columbus, OH, and another from Milwaukee are expected to play the Stockyarders in this year’s exhibition series along with Cleveland, while the rematch against Ontario could be played in Toronto.

2018 was chock full of distractions including the Denver game, news that a consortium had applied for an RFL franchise to set up a team in New York City and reports that Toronto Wolfpack backer and Australian mining magnate David Argyle planned to buy the London Skolars and relocate the team to the US.

In 2019, we won’t have the Denver issue as the promoters have withdrawn their plans to make the England versus New Zealand contest a three-year fixture. As for the NYC franchise, it’s unlikely to happen this year as the RFL seems to favor 2020 at the earliest for when another trans-Atlantic team might be feasible.

Furthermore, the same consortium behind the NYC bid wanted to stage an Australia versus Tonga Test in the big apple. It didn’t happen as they ran out of time to organize it, but frontman Ricky Wilby told us it could go ahead this year.

“The NRL is keen to work with us moving forward, which is a real positive from all the negotiations,” he said.

“We’re working hard behind the scenes to make sure this isn’t a one-off, but a long-term goal, not just for the New York rugby league bid team, but also for international rugby league moving forward in the States.”

And that brings us to the end of the year when the USA will have the opportunity to enter a repechage World group playoff to play for the sixteenth and final qualification place for 2021 RLWC.

Assuming US Association of Rugby League opts to compete in the repechage, the Hawks will go up against the winner of the Asia Pacific/MEA group and as they were the runners-up in the Americas region, they will host the playoff.

“As far as I’m aware we’ve got another shot at it and we’ll be taking that shot,” said US head coach Rutgerson.

“We’ve got a few things we need to fix up all across the board and we’ll be doing that. We’ll be doing everything we can to make sure that we’re in the World Cup.”

Lots to play for in the US this year, so we should expect a competitive season ahead.

It’s also available on iTunes at https://www.apple.com/itunes/ and on Stitcher https://www.stitcher.com/s?fid=192832&refid=stpr