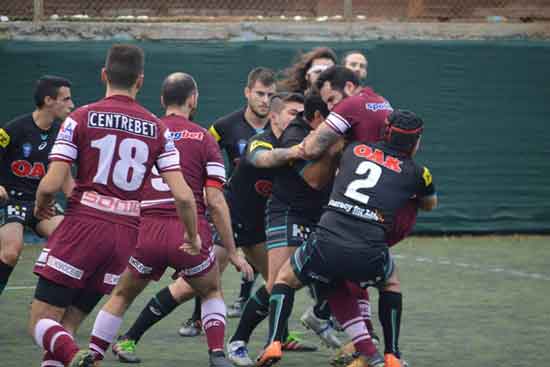 The Greek Rugby League Association has reported an encouraging end to the year, with reigning champions Rhodes Knights standing top of the league after winning all four of their matches to date. They have been pushed all the way by the sides in second and third, only just defeating Athens pair Attica Rhinos 22-20 away and Aris Eagles 26-22 at home.
Newcomers Larisa are yet to get off the mark but their inclusion is one of the highlights as 2018 comes to an end, along with the start of the women’s game – with Aris and Patras setting up sides – which it is planned will lead to the formation of a national women’s team.

“After three months, seven games and two friendly matches for our women, I have to say things are going well so far,” commented GRLA vice-president Aris Dardamanis. “Despite the difficulties we have in Greece, the 2021 World Cup qualifying game against Norway is coming up in May 2019 and we want to write history. Our passion for the sport is stronger than ever before.”

In the build-up for the clash with the Norwegians, which will be held in London and also doubles as the European C decider with promotion at stake, an Athens versus Rest of Greece trial match has been confirmed for early 2019.

RLEF general manager Chris Thair noted: “Increased participation, growth in the women’s game and a vibrant domestic club competition show rugby league in Greece is alive and well. I’m delighted for the people involved as they work under arduous conditions at times and we’ll continue to support them. The GRLA remains undeterred despite the difficulties and increased hostilities against its activity. Matches continue to be played and playing numbers continue to grow.”

Pictured is action from the recent clash between Aris and Patras Panthers, which the Eagles won 44-4. National player Kostas Georgogalas of Aris is being tackled by his former teammates, having moved from Patras, where he was studying, back to the capital.