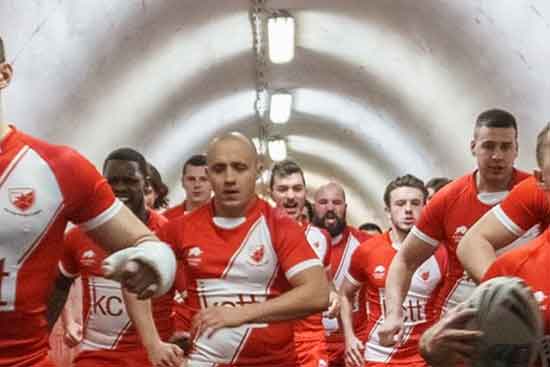 Red Star Belgrade will bring one of the great names of European sport to the oldest competition in Rugby League when they are included in the draw for the First Round of the 2019 Challenge Cup next Friday (December 14) at Emerald Headingley – the venue for the first Challenge Cup final in 1897.
The draw, which will be held before the second international between England Academy and Australia Schoolboys, will be streamed live on the BBC Sport website at 5.30pm.

Red Star, a globally recognised sporting name largely through the success of their football club who won the European Cup in 1991, have been playing Rugby League since 2006, and recently retained their Serbian Championship title – also contributing the majority of the players who have established Serbia as no17 in the recently-released International Federation world rankings.

Their application to play in the Challenge Cup was accepted by the Rugby Football League on the basis they must play away in rounds one and two.

Colin Kleyweg, the chairman of Red Star Belgrade Rugby League, said: “Red Star Belgrade are so proud to be a part of the 2019 Challenge Cup. This is a huge day for rugby league in Serbia and for all expanding nations that nurture local talent and local players.”

Red Star’s entry follows the historic Challenge Cup triumph for the Catalans Dragons at Wembley last year – the first non-English team to win the competition. The Serbian champions will be joined by 51 sides from across the community game in Round One with ties to be played over the weekend of January 26-27.

Wales, Scotland and Ireland are represented by Torfaen Tigers, Edinburgh Eagles and Longhorns respectively – with Longhorns, from Leinster, included for the second year running.

National Conference League Premier Division champions Hunslet Club Parkside are joined by 30 other teams from across the NCL divisions – including Kells and Normanton Knights, who both reached the Fourth Round of the 2018 Challenge Cup.

There are four clubs from the south of England: Hammersmith Hills Hoists and London Chargers, who came head to head in Round One in 2018; the All Golds from the West of England League; and North Herts Crusaders, the East League champions who will be making their Challenge Cup debut.

The North West Men’s League and Yorkshire Men’s League each have two representatives: Bentley and Batley Boys from Yorkshire; and Orrell St James and Haydock from the North West. Distington, who enjoyed a successful cup run in 2018 before falling to Betfred League 1 side Coventry Bears in Round Three, will again join the Cumbrian challenge, and Wallsend Eagles will fly the flag for the North East.

Teams from each of the Armed Services – the Army, the Royal Navy and Royal Air Force – will be joined by the British Police team in the draw.

The 26 winning teams from Round One will progress to the Second Round in February, before Betfred League 1 teams enter at Round Three in March, and 12 Betfred Championship sides join in Round Four later in the month. Toronto Wolfpack and Toulouse Olympique XIII will not take part in the 2019 Challenge Cup.

Four Super League clubs – Hull Kingston Rovers, Leeds Rhinos, London Broncos and Salford Red Devils – will all enter in Round Five in April before the top eight from the 2018 Betfred Super League join in Round Six the following month.

BBC Sport will once again select one fixture from Round One through to Round Five for live-streaming via the BBC Sport website. The selected game from Round One will be announced in due course following the draw.

Rugby League Euro B confirmed for October in Serbia