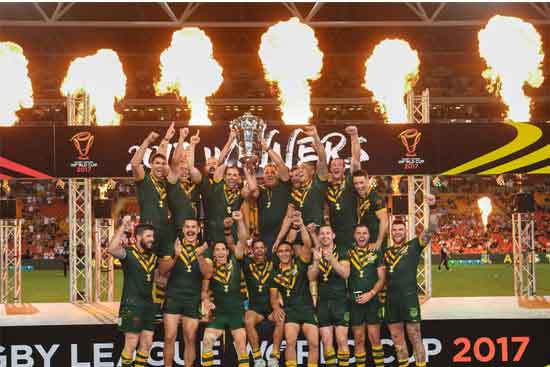 With England having won those encounters 2-1, and beaten the same opponents in Denver mid-season, Wayne Bennett’s men have gone above the Kiwis into second place, and significantly closed the gap on Australia. It is likely that when the Kangaroos travel to England in 2020, top position will be up for grabs.

England director of rugby Kevin Sinfield commented: “This is a good way to round off what has been a successful year for all our teams in the England Performance Unit. We saw a good number of new faces come through into the senior England squad, some of them from the Knights programme who themselves had a successful trip to Papua New Guinea.

“It’s pleasing to see the investment we’ve made, in combination with Sport England, paying dividends and due credit for what has been an excellent team effort on and off the field.”

France has moved back to sixth after their triumph in the European Championship and passage to the 2021 World Cup, Wales and Jamaica also going up in the rankings after similarly making the tournament in England in three years’ time.

The success of the Emerging Nations’ World Championship in October has seen two new entries with Poland and Turkey ranked for the first time, giving a significant boost to the Eastern Europe/Mediterranean region.

“To get a ranking is a huge first milestone for us as a rugby league nation, and a great shot in the arm for all of us involved,” said Poland head coach, Lee Addison. “We dedicate it to Łukasz Łucka who is the tireless, driving force behind the game here.

“It’s important that we now build on this momentum, and incumbent on all of us to make sure we do everything in our power to continue to grow the domestic game in Poland, but we are on the map and that should help drive us forward.”

In all, 65 fully sanctioned international matches were played in the calendar year which represents a record.

There were no changes to the women’s rankings.

The Official Rugby League International Federation (RLIF) World Rankings are calculated on each nation’s performance over the current season and the four preceding seasons.  Points are awarded to each team for each match based on
The result of the match i.e. win, lose or draw
The margin of victory (or defeat)
The relative strength of opposition faced
The date of the match – more recent matches are weighted more heavily
The importance of the match e.g. a World Cup match is given greater weighting than a standalone international.
The points are then used to create the Official World Rankings by ordering the teams by virtue of the points gained over the five season period.
Only officially sanctioned matches played at senior level between two approved members are considered as part of the rankings