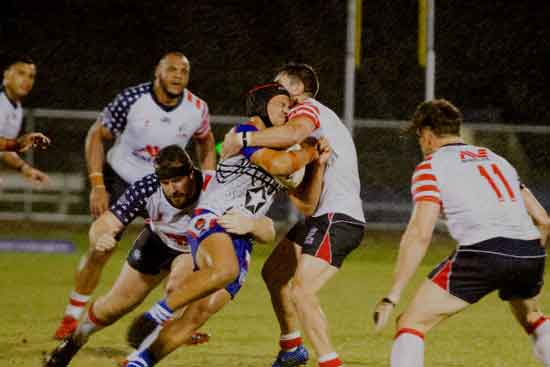 Perhaps not surprisingly, the USA Hawks have slipped again in the latest RLIF world rankings.

The Hawks check in at #15 in the rankings released Monday, December 3, 2018, and while it’s a drop of only one place, it is also the continuation of a recent decline.

The USA opened its 2017 international season with wins against Jamaica and Canada to clinch the Americas Championship, but then had three big losses to Fiji, Italy and Papua New Guinea at the World Cup which caused them to slide down the rankings.

In 2016, the Hawks went 3-0 in Americas Championship and Colonial Cup games to retain their #10 ranking, although they did lose an exhibition match early that year to the Leeds Rhinos.

The Hawks kept their #10 ranking through 2015 after a 2-2 season. They were beaten by Canada twice in Colonial Cup games in the autumn, before knocking off Jamaica and exacting some revenge against the Wolverines in the World Cup qualifiers at the end of the year in Florida.

The USA earned its highest ever ranking of #9 midway through 2014 and it was based on the 6-3 record the then Tomahawks had put together the previous year.

Their 2013 record included three wins against Canada in the Colonial Cup series, France in a RLWC warm-up game and then the Cook Islands and Wales at the World Cup that year. Their losses were against the Wolverines in the Colonial Cup, plus Scotland and Australia at the RLWC.

2014 was a quiet year with the US playing just two internationals and consequently dropping one spot to #10. In their final game as the Tomahawks, they beat Samoa in the Ohana Cup in Hawaii before losing to Canada, as the newly named Hawks, in the Colonial Cup in Toronto.

The Tomahawks started 2013 ranked #12 and had moved up two spots by the end of that year.

In 2012, the US had a winning record of 3-1. They posted two Ws against Canada in the Colonial Cup after beating Ireland in the Donnybrook Cup. Their one defeat was to Tonga in the Ohana Cup in Honolulu.

The Tomahawks went 3-2 that year, including a loss to Ireland in the Donnybrook Cup, a split Colonial Cup series with Canada and victories against Jamaica and South Africa in the Americas zone qualifiers for the 2013 World Cup.

That followed a perfect 3-0 Test run in 2010 when they accounted for the Canadians twice and the Reggae Warriors once in Colonial Cup and Atlantic Cup matches.

Clearly, the USA’s purple patch was in 2013 when they caused the rugby league world to sit up and take notice with their wins against the French, Cook Islanders and Welsh, but since then they have fallen six places in the RLIF rankings and that’s despite going 9-7 overall (not including unofficial loss to Leeds) in that time.