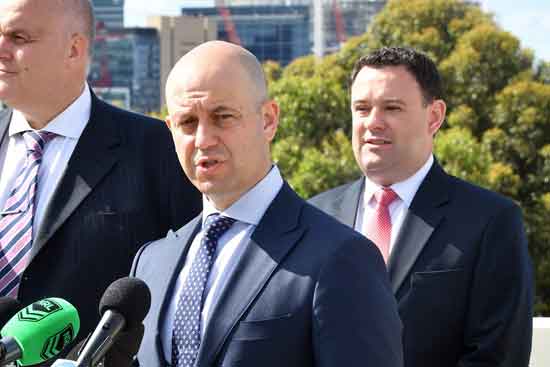 The NRL and the RLIF have announced that the Downer Rugby League World Cup 9s Sydney 2019 will be staged featuring 12 nations playing over the course of two days at the new Western Sydney Stadium next October.
The tournament will be held on Friday, October 18 and Saturday, October 19, 2019, and will feature men’s and women’s tournaments.

Twelve teams in the men’s competition and four teams in the women’s tournament will compete across 28 matches and 12 hours of action.

“The Nines concept has been a great success and this is the obvious next step – Nines at international level,” NRL CEO Todd Greenberg.

“The best players in the world will be on show in this unique concept over the course of two days at the brand new Western Sydney Stadium. This will be the typical fast-paced and free-flowing action which the Nines brings but with the added international flavour.

“The whole week will be a celebration of Rugby League in western Sydney, with a number of community initiatives planned.

“The benefits for the game are enormous. It will be an exciting and innovative tournament for our fans and it will also help to develop international Rugby League.

“It will be a fantastic way to showcase the game and I’d like to thank the NSW Government and Destination NSW for their support, as well as to the RLIF for their strong belief in this concept.”

The NRL will work with the RLIF on the finalisation of the participating nations for the tournament.

Mr Greenberg also acknowledged Downer, naming rights partners for the tournament, having previously been supporters of the NRL Nines concept as well as Kangaroos-Kiwis Test matches.

The NRL has also announced that Fox Sports would be the official broadcast partner of the Downer Rugby League World Cup 9s Sydney 2019. Fox Sports will broadcast every men’s and women’s match live nationally across the two days of competition.

RLIF CEO Nigel Wood said Sydney would be a fantastic location for the World Cup 9s concept to be showcased.

“The shorter form of Rugby League provides us with an exceptional competition to attract new fans, players and commercial partners to the sport across the world whilst appealing to our current supporter base and partners who love the speed and excitement of Nines,” Mr Wood said.

“The RLIF has the mission to showcase rugby league to the widest audience possible and through initiatives such as this, we are supporting that mission.”

Kangaroos Coach Mal Meninga said the event would be an important concept to grow the game globally.

“I have no doubt that World Cup 9s will be a great way to expand the game at an international level,” Mr Meninga said. “I’m a real advocate for this concept based on what it can do for the international game.”

Mr Marshall said: “I am thrilled that Sydney will be the first city in the world to host the Rugby League World Cup 9s, which is expected to attract more than 13,300 overnight visitors to Sydney, injecting approximately $11 million into the NSW economy.”

Mr Ayres said: “NSW is the home of Rugby League in Australia and Western Sydney Stadium will provide the best sporting experience for fans anywhere in the country, making it the perfect location to host this event.”

The Downer Rugby League World Cup 9s Sydney 2019 has been secured for Sydney by the New South Wales Government.

Tickets will go on sale next year. But supporters can register via a waitlist at https://www.nrl.com/waitlist/