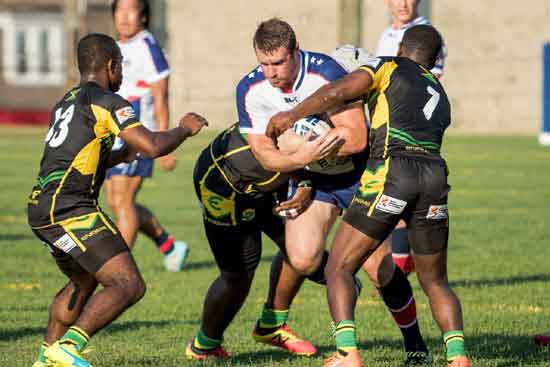 USA and Jamaica will meet at the Hodges Stadium, University of North Florida, Jacksonville on Saturday (kick off time 4pm local) to decide the eleventh nation to qualify for the 2021 Rugby League World Cup in England.

In torrential rain, the host Hawks were comfortable 62-0 winners over newcomers Chile in the opening round, seven of their tries claimed by their unstoppable right-hand side combination of Ryan Burrows, with a hat trick, and debutant Brooklyn’s Brandon Anderson who grabbed four; Bureta Faraimo also finishing with 16 points from a try double and four goals.

“In the early stages we weren’t sure what to expect from the opposition,” said USA head coach Sean Rutgerson of the first South American nation to play in the qualifiers.

“We still had to defend because they ran hard, but we just had a bit more experience. It was a good chance to give some of the guys plenty of game time, just so they can get used to playing internationals, and they went well.”

Chile played with heart but were outclassed, loose forward James Horvat their best.

Jamaica eased clear of the Canada in the second half of the preceding game, two second half tries from Wakefield’s Super League star Ben Jones-Bishop, playing at full back, the turning point in their 38-8 triumph.

Reggae Warriors head coach Romeo Monteith commented: “Canada threw everything at us and I’m proud of our boys who stuck to the task and didn’t panic.

“Our defence won us the game, the turning point was when we kept them out on four consecutive sets just before halftime.

“The second half was even more pleasing as our attack really got into motion and the finishes were really good.

Looking ahead to the decider, Monteith added: “There were a lot of sore bodies but the lads are really looking forward to the final field session.

“It will be a great game for the fans, both teams are evenly matched and it will come down to who makes the least errors to claim that World Cup spot.”

Chile and Canada meet in a rankings match (kick off 1.30pm). According to Wolverines head coach Ben Fleming: “The effort by the boys (against Jamaica) was fantastic, they were all absolutely devastated afterwards that their World Cup dream was over.

“On top of a true captain’s performance from Rhys Jacks, fullback Jordan Drew impressed on debut. I have some tough decisions to make for Saturday’s game against Chile.

“Team Manager, Paul Buchanan, has pulled together a varied itinerary and team spirit is high. Now everyone’s looking forward to getting on the pitch.”

Both games will be live-streamed on the national federation’s and Toronto Wolfpack’s Facebook sites.