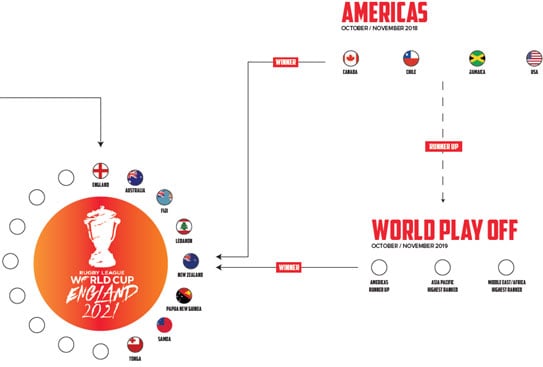 Canada and Jamaica have named 19-man squads for their clash in the Americas Championship at the University of North Florida Stadium, Jacksonville, tomorrow (Tuesday, kick off 5pm).

The match is part of a twin-event, with the winners facing USA or Chile in a second double-header at the same venue on Saturday; the victors in that game gaining automatic qualification to the 2021 Rugby League World Cup in England.

Canada’s head coach, Benjamin Fleming, commented: “The first training session after arriving here was very impressive. It seems like everyone has done their own preparation and it was somewhat seamless.

“Now the pressure, intensity and expectation becomes greater on and off the field, but a solid foundation is set. Players are bonding and building combinations really positively.”

Fleming added: “We understand how important it is for the side and for the nation to perform well and try to reach the World Cup for the first time.”

Reggae Warriors’ head coach Romeo Monteith has been happy with the way his men are looking in readiness.

“The squad has come together nicely since we got into Jacksonville on Saturday,” he said. “Our physio Ben Harper has done a good job working with the boys to get over their travel fatigue and niggles.

“Lead coach Jermaine Coleman put them through their paces and I was really happy with what I saw, they understand the playing system and the skill level was high.”

Monteith remarked: “We have a very positive vibe in the camp and the boys are just raring to go out there and make Jamaica proud.

“We have had many great battles with the Wolverines over the years; a free, open style of rugby league has characterized games between our nations.

“They are always high scoring affairs and I believe it will be the same on Tuesday. It’s a pity one of us will be out of contention for the 2021 World Cup, but that’s even more reason both squads will give it their all.”

The matches will be live streamed through various Facebook channels which has given the tournament and players a boost going into it, according to Rugby League International Federation official and tournament director, Danny Kazandjian.

“It is really pleasing that the City of Jacksonville and Toronto Wolfpack have combined to provide additional visibility through a network of online broadcasters,” he said. “North America is a strategically important territory and this innovative approach will further every stakeholders’ interests.

“Furthermore, the RLIF has confirmed a multi-annual investment package into the Americas Championship to increase its status and scope, and in recognition of the growing number of eligible nations.”