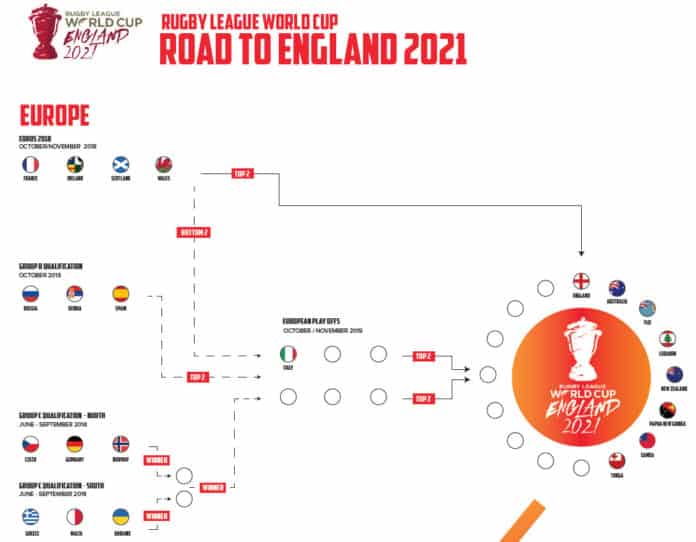 “It’s unbelievable, this result is very special for us,” said Brian Juliff, chairman of Wales Rugby League as his nation became the tenth team to qualify for the 2021 Rugby League World Cup, with a fine win in Wrexham in the Celtic decider.
The opening exchanges were all Wales as they established a 20-0 lead inside 28 minutes, principally on the back of a terrific short kicking game.

The Dragons took the lead on four minutes when, from an inch-perfect Josh Ralph kick, Chester Butler just got his hand to the ball to score.

James Olds’ missed the conversion but made up for it moments later when he kicked his first penalty.

The hosts extended their lead following a superb length of the field move culminating in Rhodri Lloyd pouncing on a Ralph grubber; Olds converting and adding another penalty to bring the score to 18-0.

Ireland were forced into errors chasing the game, another long range home raid resulting in Curtis Davies feeding Gavin Bennion who squeezed his way over.

The Welsh conceded two successive penalties and Ireland made them pay, Scott Grix using his guile to burst through, Liam Finn missing the tricky kick in the run up to half time.

The Irish had the first chance in the second half, Jack Higginson gathering his own grubber, his dive for the line just short.

Wales countered decisively, Curtis Davies again the provider and Ben Evans doing well to reach out to the line despite a posse of defenders clinging on.

Olds converted and once again followed that up with a penalty to extend Wales’ lead to 28-4, to effectively seal the win and qualification.

“We’ve had seven new caps over the three games and they’ve all acquitted themselves great, we’ve found some stars,” said Wales coach John Kear. “You try to improve and anyone who saw us minute one against France and minute 80 today would have seen a drastic upward curve, this was a really accomplished performance.”

Wrexham-born Rhys Williams won his 30th cap on his home turf, bringing him level with fellow joint record holders Jordan James and Ian Watson, and celebrated in style by running in Wales’ fifth try just after the hour.

George King gained a consolation for Ireland two minutes later, but man of the match Ralph burst through tiring Irish defence with some lovely footwork; Olds converting and finishing off the scoring with another penalty goal.

“We didn’t complete and when the game started to go away from us we didn’t have any composure,” bemoaned Ireland coach Stuart Littler, whose side now join Scotland as joint top seeds in next years’ final European World Cup qualifiers. “I thought we were still in it at half time but we’ll learn from performances like this. There’s still light at the end of the tunnel, we’ll have to do it the hard way.”

He will have to achieve it without skipper Liam Finn and, most likely Scott Grix, who are both set to retire from the international scene they have so graced.