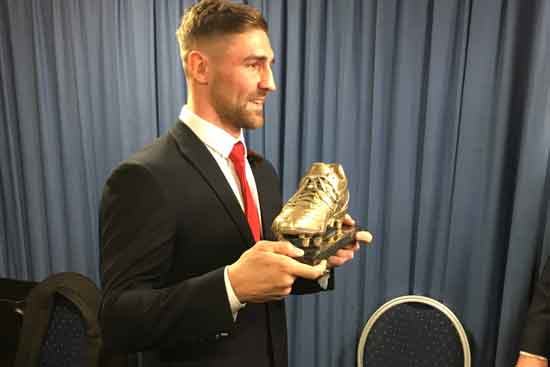 Tommy Makinson has become the first winger and only the fifth Englishman to win the Golden Boot.

Makinson was awarded the Golden Boot at a special dinner held in Leeds during the week. The St Helens flyer, who only made his debut for England in Denver in June, has had an outstanding season for both club and country.

He grabbed a hat-trick at Anfield in the second Test against New Zealand and has scored four tries in three Tests in 2018. He also helped St Helens win the League Leader’s Shield and crossed 11 times in 28 Super League appearances this year.

The 27-year-old debuted for Saints in 2011 and was a grand final winner four years ago.

“It’s pretty special – it hasn’t quite sunk in yet. Even to be nominated was something special and to come away with it means so much to me,” he said.

“I had my injury doubts and troubles – for two years I was out of the game so I was questioning myself when I come back. I come back slowly from those injuries then got two good years before me which gave me confidence.

“It’s been a tough two Tests and it could have gone either way. We want to go all the way and win all three and the Kiwis aren’t just going to let that happen so it’s going to be another tough Test.”

Under new rules introduced this year, the Golden Boot award is determined by performances in internationals from the 2017 World Cup final to last Sunday.

Kevin Sinfield was the last Englishman to win the award in 2012.

“If you look at the three games he’s had for England, he’s been outstanding, absolutely outstanding,” he said.

“Ryan’s been wonderful and a great player for England but he [Makinson] still didn’t come onto my radar until this year, I didn’t know he was that good.”