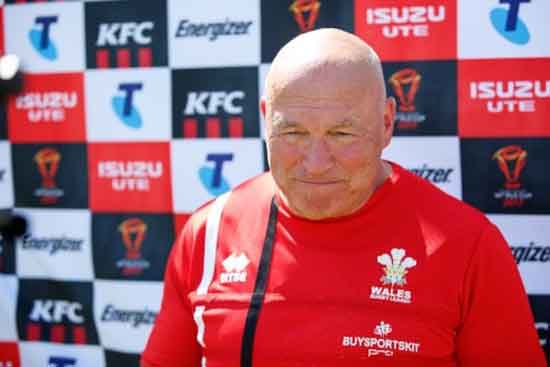 This year has been “the best since 2015”, according to Wales head coach John Kear.

Wales and Ireland go head-to-head at the Racecourse Stadium in Wrexham on Sunday (3pm) and the winner will qualify for the 2021 Rugby League World Cup.

The Dragons lost their opening European Championship encounter in France, but they responded excellently with a 50-12 victory over Scotland.

As Ireland have also won one match, beating the Scottish in round one, it makes the Racecourse showdown a winner-takes-all contest.

“Sunday’s a massive game for us,” Kear said. “We’re all aware of what the rewards are.

“Regardless of the rewards for any game, you’ve got to go through the processes to earn that.

“We’ve been trying to emphasise that the rewards are great, but you’ve still got to do the ordinary things in rugby league in order to achieve them.

“We’ll be in and amongst it, but I’m fully aware of how good Ireland are.

“There are four lads who I’ve coached a great deal and I’ll tell you they’re good players.

“It’s a heck of a challenge, but we’re fully aware of it and we can plan for that.

“If we go through processes in an efficient manner, we’ll certainly be in with half a chance.”

Kear, who has an extensive coaching career at both international and club level, guided Wales to the European Championship back in 2015.

And he admits this has been the most enjoyable year coaching his Wales side since then.

“I feel really revitalised by the fact there are so many young men in this squad. They’re young men who are a very good standard of rugby league player, but they’re also young men who will improve over the next couple of years.

“That makes it exciting hopefully building up to the next World Cup, but the immediacy is attempting to get there and that’s no mean feat because it’s a tough challenge playing a very good Ireland side.”

If Wales perform as they did against Scotland, however, Kear is confident his side can put in a good showing.

“I was pleased with the first-half last weekend because I thought they showed great resilience,” he said.

“It would’ve been easy to hang their jumper on the peg, say we’re 12-0 down and we’ll put it in the too hard bin.

“They didn’t do that. They said we’re 12-0 down, we’ve got a big challenge and they worked really hard to get back in the game.

“They went away from the opposition in the second-half, which was very pleasing.”

Wales Rugby League will be paying respect this Sunday to their two international players who lost their lives in the First World War.

A two minutes’ silence for Remembrance Day will take place before the decider for 2021 Rugby League World Cup qualification between Wales and Ireland at the Racecourse Stadium in Wrexham (3pm kick-off).

The two Welsh international rugby league players who lost their lives during the 1914-18 conflict were William George Thomas and Phillip Thomas.

George Thomas was heritage #8, meaning he played in the first ever full international rugby league match anywhere in the world when he turned out as prop for Wales in their 9-8 win over New Zealand on January 1, 1908 in Aberdare. He also played against England in 1912, kicking a goal in Wales’ 35-5 defeat.

His one Great Britain appearance came in their second ever match, an 18-6 defeat to New Zealand at Stamford Bridge, Chelsea.

Signing up for war in 1915, he sadly died on the Somme on July 3, 1916 when he was hit by a German shell. He is now remembered in the Thiepval Memorial in France.

Phil Thomas was heritage #14, winning the first of his four Welsh rugby league caps at centre in the country’s second ever international, a 35-18 win over England on April 20, 1908 in Tonypandy. His three other Welsh international matches all ended in defeat – twice to England and once to Australia – with the latter in the second Kangaroo tour of 1911/12.

He also made one Great Britain appearance in the third test against New Zealand in 1908 in Cheltenham, ending in an 8-5 defeat.

Originating from the Tredegar rugby union club, he turned out for Oldham, Leeds and Hull Kingston Rovers in the professional game.

Phil died on May 25, 1915 on the fields of battle in Belgium and he is remembered in the Ypres (Menin Gate) Memorial in that country.